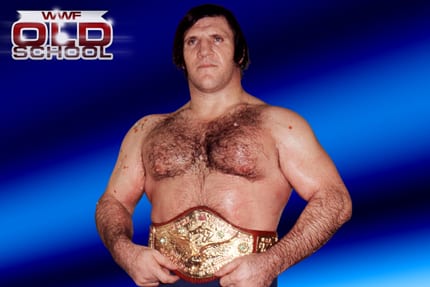 There’s an article up at Sports Illustrated’s blog where WWE Superstars and Legends talk about WrestleMania and their career. WWE Hall of Famer Bruno Sammartino has some shocking things to say about fellow Hall of Famer Hulk Hogan. Below are a few highlights:

“There is a large wrestling audience that doesn’t want to say goodbye to my generation. Guys like myself, Ric Flair, and Hogan, and the fans still appreciate us. And it goes both ways, absolutely, because it’s the same for me. It’s hard to walk away. I thought, in the beginning, my career would two, three, four, five years and then out and done. I never imagined, all these years later, I would still be in the ring and still wrestling. In March of 2001, I thought it was over with. It’s unbelievable how time flies, and it’s still a thrill for me. I want to give my fans something to remember.”

“I know the WWE is not looking for people like me to main event WrestleMania. It’s interesting, there have been a lot of people the company believed in right away that didn’t pan out to be anything. Guys with every superstar quality and can be on the cover of a magazine right away. I was never that guy. I’ve always enjoyed the process of earning people’s respect and earning my place. I’ve never asked to be handed anything.”

“My whole life I’ve been fed by the WWE. My father was fortunate enough to provide for his family through wrestling. I’ve always been fortunate to have a seat at the table, but there’s a great deal of pride in being a provider. Now it’s my chance to sit at the head of the table. I respect what people before me have done, but my time is now.”

“I would never compare Hogan to any of the greats. He don’t belong, or deserve to be mentioned, in the same breath. No way.”