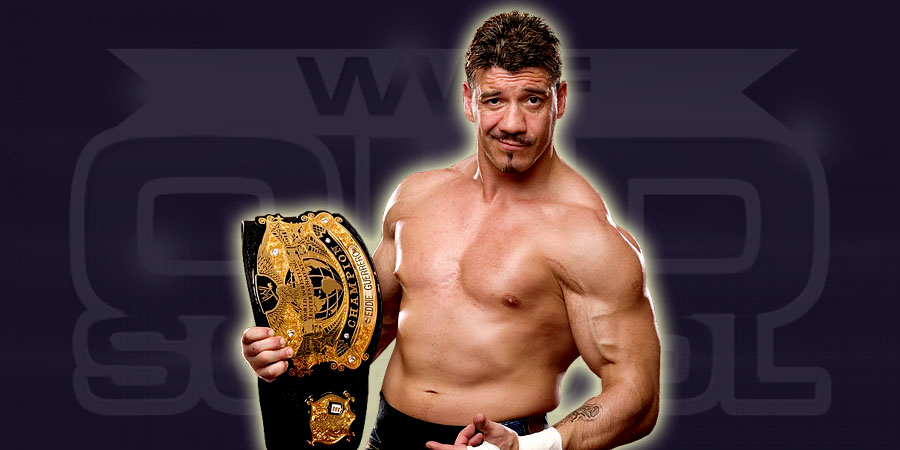 On “Rowdy” Roddy Piper taping the pilot episode of The Chavo Show:
“The way it came about and it’s sad that we are even talking about it like that now but it was going to be my pilot episode. That actually was the fourth episode that I filmed but it was Piper, so he gave us some They Live stories and how that all came about, I’ve known the guy since I was five years old so just the camaraderie of us hanging out together really came through on camera and since things weren’t really ready we were wondering, do we scrap this episode but it was just so good and I want people to see Roddy the way I knew Roddy. It’s getting a great buzz and again Roddy Piper is getting ratings and stealing the show and thank GOD he was able to help me out so it’s kind of bitter-sweet. I am happy and proud it’s out there but I am missing my friend.”

On working different characters and gimmicks when they are pitched:
“A lot of times it was how things were done at TV and thinking about how you get on TV, so when they pitch stuff to you sometimes you say that’s something I probably wouldn’t pick for myself but if it was all up to us we would all be the Heavyweight Champion, the John Cena or the Batista. When they give you something it’s like, Ok let’s not knock it out of the park and let’s run with it. One thing that I’ve been told also is that I kind have shown on TV that I was able to do everything. I’ve been able to be a tag team wrestlers, a singles wrestler, a heel, a face, a different character making people laugh and cry and people hate me. So I’ve kind of been able to do a little bit in a sense, kind of do everything. Which is cool because that translates into Hollywood because they kind of start seeing different ones I play on TV and they start thinking wow this guy can do some stuff.”

On Eddie Guerrero not being recognized by management while alive:
“If you remember he (Eddie) went a long time with getting overlooked and passed over and told by WWF/WWE he was just a Cruiserweight and would never be THE guy. We all knew that Eddie was great. The fans knew that Eddie was great. But it’s like he wasn’t 6’10’ and he wasn’t 300 pounds, he was always the guy that could work and get those people over who couldn’t get themselves over. Eddie was in that spot for a long time and even after he was the World Champion in WWE he went back and he ended up working with Luther Reigns they wanted him to get this big (Kurt Angle’s) henchman over and Eddie was pissed. He was just coming off a World Champion run and now they wanted him to get a guy over when he should have been working with Triple H, with Shawn Michaels but they put him back with putting guys over. It took him a long time to get that recognition.”

On wrestlers similar to Eddie that don’t get the respect they should by management:
“It makes me kind of angry a little bit. People always say he’s so good, well YES. Like CM Punk it was the same thing. He was really good, threatened leaving the company so they put the rocket on him for a little bit. Sometimes, the guys that are always held down are the guys that are the best ones at making everyone look good. They are so good at their craft that nobody else can make them look good so they are stuck in a rut just alway putting people over.”

What made Eddie and Chavo, Los Guerreros so special as a team:
“I think at that time and there were a lot of good tag teams that were at their best. The Hardyz, The Dudleyz, Edge and Christian were still around here and there but there was a lot of really, really good tag teams. But at that time as far as overall and as far as wrestling and performance and entertaining and kind of doing everything I feel that we were just in the zone. Teaming with Eddie was the best because we didn’t even have to talk matches. We knew each other so well, we’ve been doing this with the ring in the backyard since we were born it just came so natural to us.”