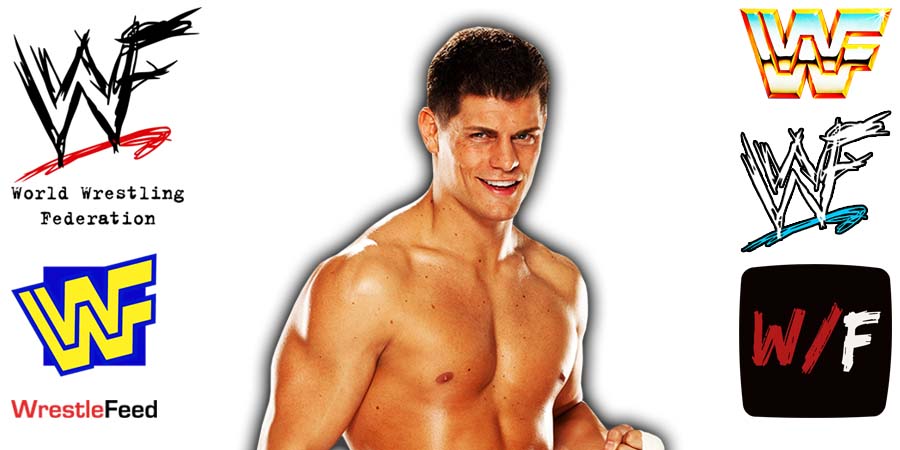 At AEW’s first show, Double Or Nothing 2019, Cody Rhodes destroyed Triple H’s throne with a Sledgehammer.

That moment received a loud pop from the AEW crowd.

After that, Cody took several other shots at WWE during his time in All Elite Wrestling, but now he’s back in WWE.

During an interview with Ariel Helwani, Cody was asked if he regrets taking shots at Triple H now that he’s back in WWE.

“Hell no, because that’s what he would have done.

One of the things I remember, I don’t think I was even Stardust yet. I ran up to Gorilla position, I’m huffing and puffing. I was mad about something, but not really mad, and I knew I should speak to Vince or Hunter.

I spoke to Hunter and he said, ‘I totally understand,’ he had his headphones on and was taking time off this segment to have this conversation, ‘Maybe, go in the writer’s room right now and rattle the cages. Make a scene. You’re not getting in trouble, go in and let them know.’

He wasn’t passing me off as much as he sincerely was…the door has their names on it, knock and say your peace. What’s the worst that can happen? Doing this without far.

We have to keep the pot going and grow into these top stars ourselves. I don’t think I’d change a thing. I definitely wouldn’t change the throne.”

In a previous interview, Cody revealed that he met Triple H backstage at WrestleMania 38.

Cody has also revealed in the past that Triple H is actually his favorite wrestler.