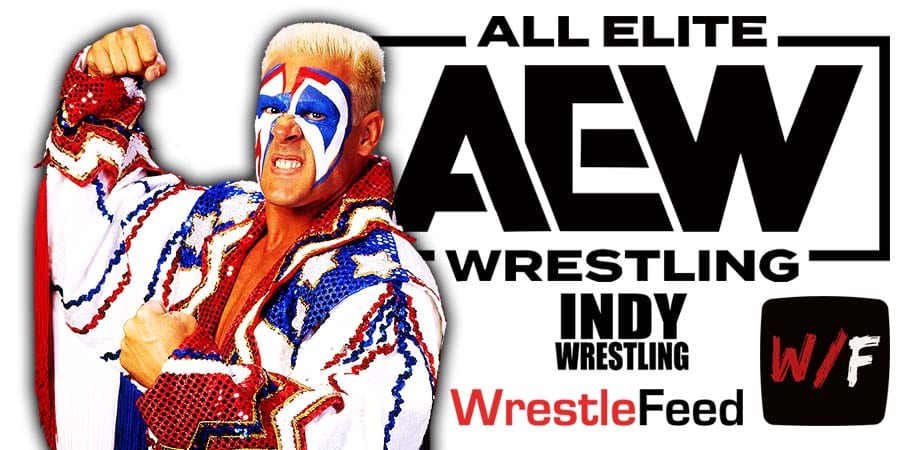 – Bryan Danielson def. Dustin Rhodes to advance to the next round of the AEW World Title Eliminator Tournament (former WWE Cruiserweight Champion Tony Nese was shown in attendance during this match)

– The Elite vs. Dark Order is announced for next week’s Halloween episode of Dynamite. AEW World Champion Kenny Omega sent a message to “Hangman” Adam Page that they will destroy his friends. That if fans knew the real insecure Hangman they wouldn’t be chanting “Cowboy Sh*t”, they would be chanting “Coward Sh*t”.

– Sting is about to give an update on Darby Allin, but MJF interrupted. MJF claimed Darby isn’t coming back and it’s all because of Sting’s negligence. That he ended up in the same spot as his old pal Lex Luger.

Sting punchede MJF, but Wardlow & Shawn Spears helped MJF get the upper hand. MJF punched Sting with the Dynamite Diamond Ring and sat next to Sting and said that if he comes back, Darby will always fall short and be second best to him.

– Britt Baker (c) vs. Tay Conti for the AEW Women’s World Championship is announced for Full Gear. Britt said Tay made a mistake laying her hands on her Title on Rampage, and now she’s gonna have to beat Conti’s a$$ that she loves to show off all the time.

– Ruby Soho def. Penelope Ford to advance to the next round of the TBS Title Tournament (The Bunny went after Ruby, but Red Velvet stopped her)

– Wardlow is upset with MJF for letting him get beat down by Sting last week. MJF apologized and claimed he was in fight or flight mode and wasn’t thinking straight. MJF said he’s been putting pressure on Wardlow and offered Shawn Spears to be his accountability buddy.

– Bobby Fish def. Anthony Greene (After the match, Fish turned heel and kept attacking Greene. CM Punk then came out to make the save and Fish left)

– Eddie Kingston def. Lance Archer to advance to the next round of the AEW World Title Eliminator Tournament

– Sammy Guevara vs. Ethan Page for the TNT Championship is made official for next week. If Sammy wins, it’ll be Inner Circle vs. American Top Team in a 10 Man Tag Team Match at Full Gear and Sammy gets to pick which members they face.
If Page wins, not only does Sammy lose the TNT Title, but he has to leave the Inner Circle.

– Jungle Boy def. Brandon Cutler (After the match, Jungle Boy challenged any other member of The Elite to a match. Adam Cole came out and teased accepting the challenge. Young Bucks came out and they beat down Jungle Boy. They threw Jungle Boy off the stage through two Tables)

– “Hangman” Adam Page apologized to Dark Order for leaving the way he did and thanked them for having his back.

– Miro said all the violence he’s going to create is on God for forsaking him. Miro said if his God wants him to fight 100 times, he will snap 100 necks and all the horror in his eyes, and the blood on his hands will be God’s fault.

This episode was broadcasted from the Allstate Arena in Chicago, Illinois and featured matches & storyline segments on the road to the ‘WWE Cyber Sunday 2006’ PPV.