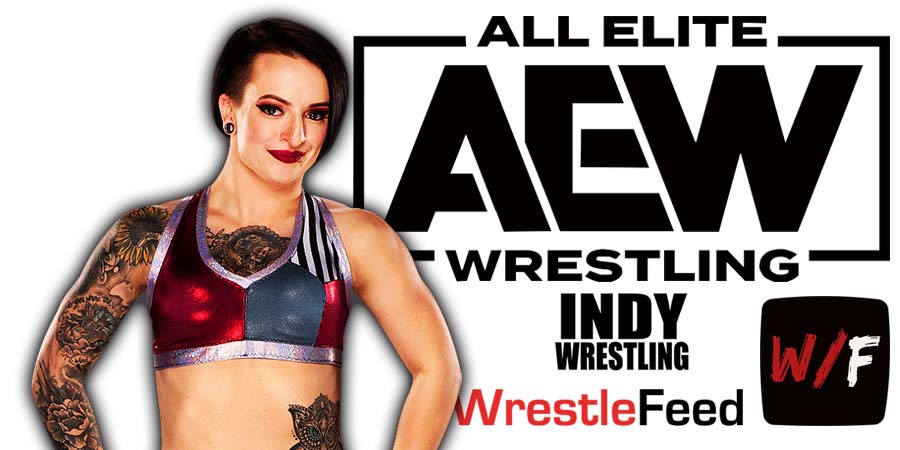 – The Lucha Bros (c) def. The Butcher & The Blade to retain the AEW World Tag Team Championship (After the match, Hardy Family Office attacked the Lucha Bros, but Santana & Ortiz chased them off)

– Matt Hardy & Jack Evans attacked an Orange Cassidy fan and cut his hair. Cassidy then walked out slowly and eventually saved him.

Ruby said Britt is not wrong, she did get fired, but getting fired was the best thing that happened to her as it brought her to AEW. Ruby claimed Britt is like every other broad she’s met: entitled, self centered, and banging some dude in the back.

Ruby said Britt won’t be able to call herself the AEW Women’s World Champion after next week as it’s coming home with her.

The #AEW Women’s World Champion Dr @RealBrittBaker and the No. 1 ranked contender @realrubysoho went face to face on #AEWRampage and it was 🔥! What a title match we're going to have THIS WEDNESDAY on #AEWDynamite: Grand Slam LIVE on @tntdrama from NYC! pic.twitter.com/Gb2QDGnfmN

– Miro (c) def. Fugeo Del Sol to retain the TNT Title and he also won Fuego’s new Car (Miro continued to beat down Fuego, but Sammy Guevara made the save)