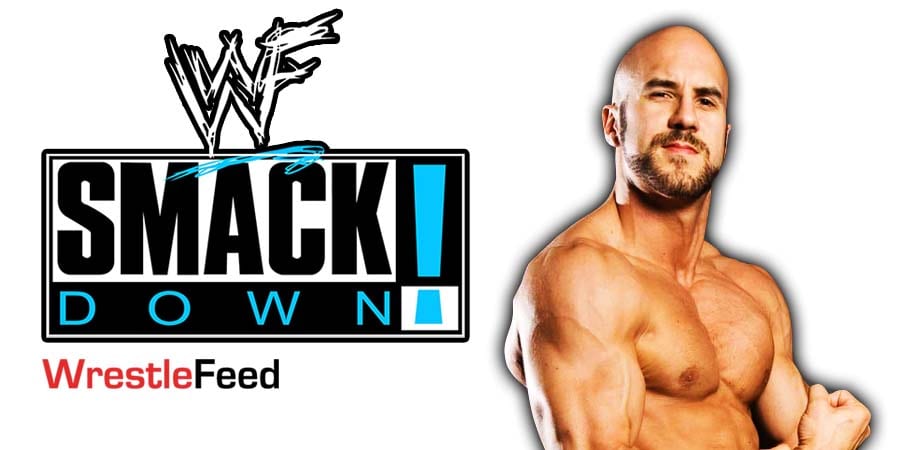 – Universal Champion Roman Reigns kicked off the show and said Edge won’t pick him for a match at WrestleMania 37 as he’s scared and knows he can’t be The Tribal Chief.

So now, the Elimination Chamber match will crown the #1 contender and that man will face Reigns for the Title on the same night.

Qualifying matches will take place tonight for this Chamber match. However, Pearce announced that two names don’t need to qualify – Jey Uso and Kevin Owens. This made Reigns angry and he got in Pearce’s face.

– Big E issued an Open Challenge for the Intercontinental Championship. Apollo Crews came out and wants to accept the challenge. Big E said anyone can accept except Apollo. Big E then said bring out his next challenger and Shinsuke Nakamura came out.

– Big E (c) def. Shinsuke Nakamura via DQ to retain the Intercontinental Championship after Apollo Crews interfered and attacked him

– Seth Rollins returned to SmackDown and said being the father of a baby girl gave him a new vision and wonders what’s next for him.

Rollins then said he needs to be the leader of SmackDown and once again goes into his Messiah character and all the wrestlers that were surrounding the ring left, except Cesaro.

However, Cesaro began to leave as well. This angered Rollins and he attacked Cesaro and said Cesaro needs him to reach his full potential. Daniel Bryan then made the save for Cesaro.

– Cesaro & Daniel Bryan def. SmackDown Tag Team Champions Dolph Ziggler & Robert Roode to qualify for the SmackDown Elimination Chamber match (Jey Uso attacked Cesaro with a Steel Chair after the match. King Corbin & Sami Zayn joined in to beat down Bryan and everyone began fighting. Kevin Owens came out and hit everyone with a Stunner to end the show)

It was pre-taped at the Tacoma Dome in Tacoma, Washington and featured matches, interviews & storyline segments on the road to the ‘WWE No Way Out 2004’ PPV.