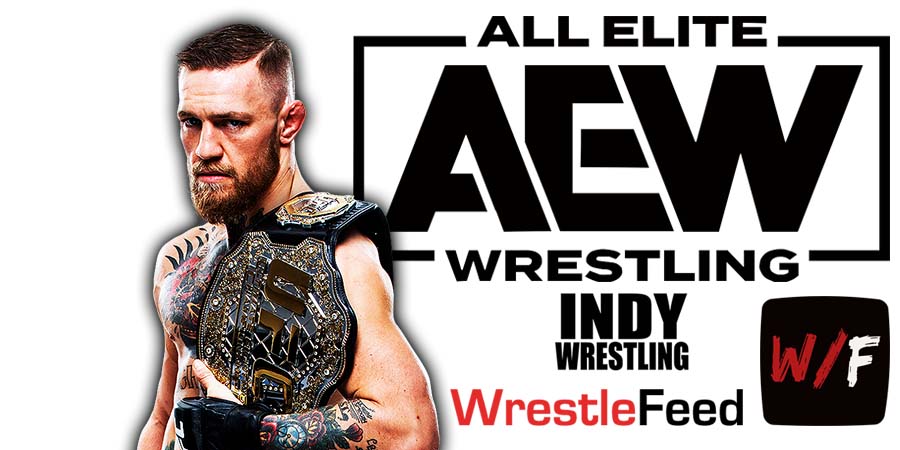 • Conor McGregor Says He Doesn’t Know Who MJF Is, MJF Fires Back

AEW World Champion MJF and UFC Lightweight (155 lbs) Fighter Paddy Pimblett have started an angle by having a back and forth exchange on Instagram.

Paddy: I do have knowledge about MMA though don’t I? Which you have zero knowledge about so let’s not go there. If you wanna have a real fight let’s sort it with the UFC, if not pipe down! Oh tell your boss to sign me up when you come to Fulham’s ground I be ready son.

MJF: Hey bud. AEW has a show coming up in your neck of the woods. If you’re man enough I’ll gladly show you how real I am.

Paddy: I’ve just said that you spaceman. Don’t act as if your calling for it. I’ve just told you straight when you come Fulham’s ground (craven cottage) get your boss Tony Khan to message my boss Dana White and see what we can sort because I know full well you won’t pass a USADA drug test to fight in the UFC.

MJF: Unlike you I’m 100% natural and I’m also 100% original. Unlike you. You’re dollar store Conor McGregor talking, Will from Stranger Things looking a$$ wouldn’t last two seconds in my world. #BetterThanYou See you in London.

“A dollar store Conor is still worth millions! Let’s go young Paddy Pimb! Don’t know who this other clown is.”

MJF then replied the following to McGregor:

Then I’ll wipe my a$$ with the original.

Stay in your lane you roided up leprechaun.

You can’t hang with the AEW World Champion. #BetterThanYou”

I’ll fuck the Conor clone up.

Then I’ll wipe my ass with the original.

Stay in your lane you roided up leprechaun.

You can’t hang with the @AEW World Champion. #Betterthanyou https://t.co/X6CPxoKwFT

It was broadcasted from the Schottenstein Center in Columbus, Ohio and featured matches, interviews & storyline segments on the road to the ‘WWF Capital Carnage 1998’ PPV.

The Headbangers vs. The Oddities (Golga & Kurrgan)

Steve Blackman vs. The Blue Blazer