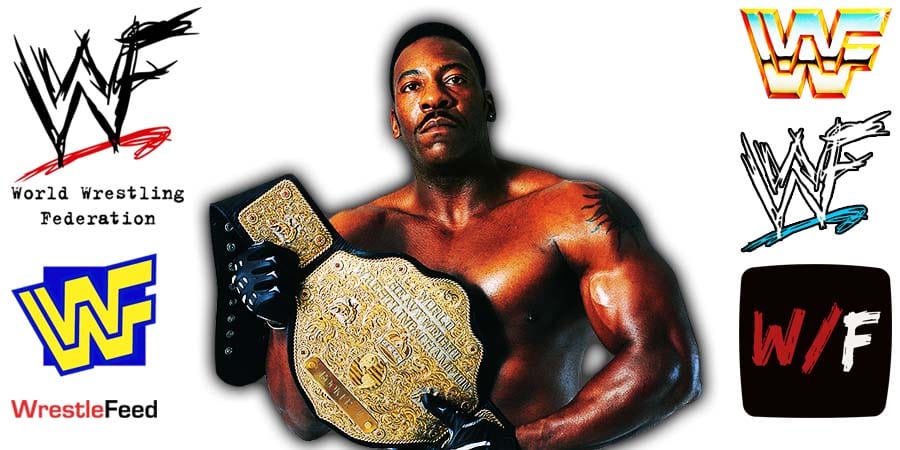 A&E’s Biography on WWE Hall Of Famer Booker T aired on Sunday night and the WrestleMania XIX feud between Triple H & Booker T for the World Heavyweight Championship wasn’t covered in it.

According to writer David Dennis Jr., that storyline was originally going to be a part of the biography as he was interviewed for it, but it got cut in the end.

“So one of the main reasons I was brought in was to talk about WrestleMania 19. I went in about it for a LONG time. But my a$$ knew it wasn’t making the final cut so I figured I was gonna get cut out from the whole doc lmao.

So there’s a lot of footage somewhere that’s pretty spice lmao. I just wonder if Vince and HHH saw it.”

The Triple H / Booker T feud probably got dropped because it featured some controversial segments that would get WWE a lot of heat in today’s world.

In 2003, then World Heavyweight Champion Triple H said the following to Booker T:

“Come on Book, dance. Entertain me, that’s your job. You’re here to make people like me laugh…with your nappy hair, and your suckas.”

Also Read: “I would change the outcome of the WrestleMania match with Triple H” – Booker T On Regrets He Has In His WWE Career

Must Read: Booker T Wants To Defeat Triple H In Saudi Arabia For A Big Paycheck

On this day in Pro Wrestling history on May 9, 1988, Jerry Jarrett’s Continental Wrestling Association held a televised House Show at the Mid-South Coliseum in Memphis, Tennessee.

On this show Jerry “The King” Lawler defeated Curt Hennig (later known as Mr. Perfect in the WWF) to become the new AWA World Heavyweight Champion..