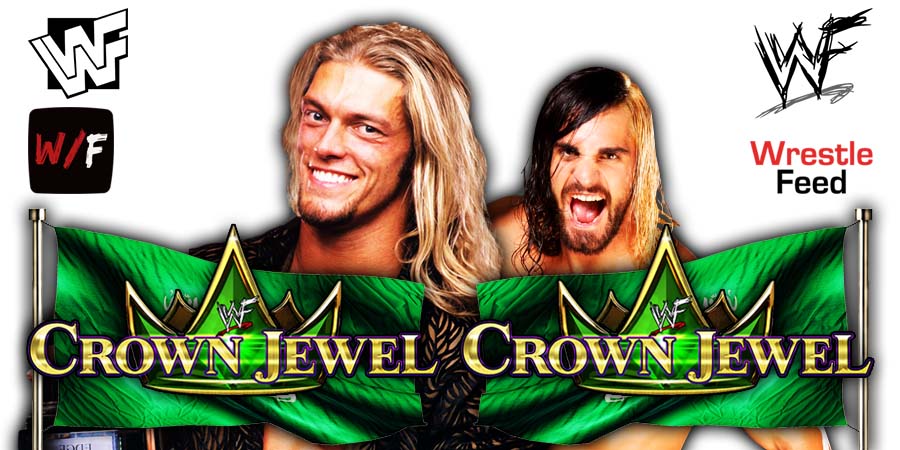 Today’s WWE Crown Jewel 2021 pay-per-view is airing live from the Mohammed Abdu Arena on the Boulevard in Riyadh, Saudi Arabia.

Paul Heyman appeared on the Crown Jewel Kickoff Show and said Brock Lesnar & Roman Reigns have no interest in the No DQ stipulation, so their title encounter is back to being a normal match.

The Crown Jewel main show kicks off with the Hell in a Cell match. Seth Rollins comes out first, followed by Edge.

Edge’s pyro entrance was amazing and there are Camels near the entrance area.

This is the final match between Edge & Rollins – The Trilogy. Both men are 1-1 against each other. Edge beat Rollins at SummerSlam and Rollins beat Edge on SmackDown at Madison Square Garden.

This is a very good match, which isn’t a surprise since Edge is in it, with Rollins taking a hard bump through a table on the outside from the top rope.

Rollins paid tribute to Triple H during this match by hitting Edge with a Pedigree.

Edge fired back with a Buckle Bomb on Rollins, followed by a Spear! Edge goes for the cover, but Rollins kicks out.

The fans are chanting “This Is Awesome” at the top of their voice!

Edge has now taken out a Table and a Ladder from under the ring. Edge picks up the ladder and hits it right in Rollins’ face!

Edge gets up and attacks Rollins on top of the ladder. Rollins counters from the top of the ladder and puts Edge through the Table with a Sunset Flip Powerbomb! Rollins goes for the cover, but Edge kicks out!

Edge is back on his feet and Rollins hits him with 3 Superkicks! Rollins has now picked up a chain from a toolbox and he’s tying it up to his boot. Rollins is looking to hit Edge with a Hardcore Steel Chain Superkick and he hits it!

Rollins has placed Edge’s head on top of a steel chair. Rollins goes for a Stomp, but Edge gets out of the way and sets up the Steel Chair and Rollins is hit in the balls!

Edge hits Rollins with 2 Superkicks! Edge now takes that same steel chain and wraps it around Rollins’ mouth and also uses a pipe to make Rollins tap out, but Edge stopped by himself.

Edge wants to inflict more pain on Rollins and places Rollins’ head on a Steel Chair and hits a Stomp to Rollins on the chair and win the match!

Edge def. Seth Rollins in a Hell in a Cell match

Edge got emotional after the match as big-time pyro went off for his win. The fans reacted in a huge way to Edge’s win over Rollins!