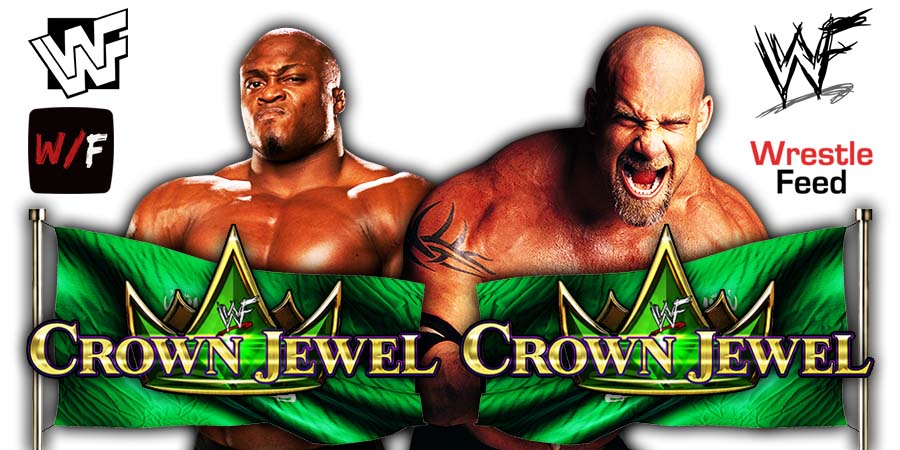 Up next is the No Holds Barred – False Count Anywhere match! Bobby Lashley makes his way out first, followed by WWE Hall Of Famer Goldberg.

Goldberg got a huge pop from the crowd! Goldberg enters the ring and Lashley takes out a Steel Chain from his pants and wraps it around his fist to attack the WCW Legend.

Lashley is now attacking Goldberg with a Steel Chair. Lashley sends Goldberg chest-first into the turnbuckle once again. Lashley now takes out a Table from under the ring.

Bobby is now working on Goldberg’s injured knee, which he himself injured at SummerSlam. Lashley has set up a Table in the corner. Lashley spears Goldberg’s knee and Goldberg turns inside out!

Lashley has wrapped a Steel Chair around Goldberg’s knee and kicks on it! Lashley once again jumps on it, this time from the ring ropes.

Fans are chanting for Goldberg. Lashley goes for the Spear, but Goldberg got out of the way and Lashley went through the Table set up in the corner!

Goldberg hits Lashley with a Spear and the crowd pops! Goldberg is looking to go for the Jackhammer and he hits it! However, Goldberg didn’t go for the cover. Goldberg is removing his gloves and throws Lashley out of the ring.

Goldberg spears Lashley through the barricade at ringside! Goldberg sends Lashley face-first into the announce table.

Goldberg has placed Lashley on top of the Steel Steps, and picks up the smaller steel steps and drops them on Lashley, but Lashley managed to get away in time.

Shelton Benjamin & Cedric Alexander have come out with Kendo Sticks to help Bobby, but Goldberg took them out!

Goldberg is assaulting Lashley with a Kendo Stick. Goldberg spears Lasley off the stage through a padded area!!! Goldberg pins and wins the match!