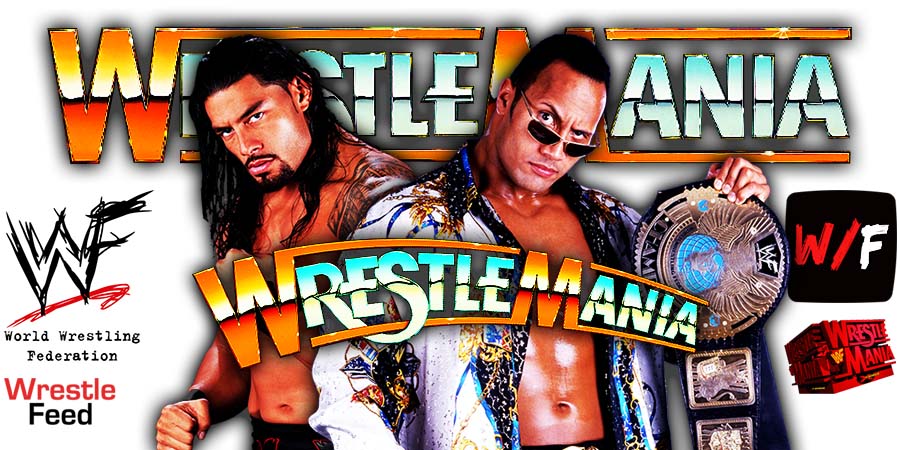 As we have noted before, there are rumors going on that Undisputed WWE Universal Champion Roman Reigns will wrestle two matches at WrestleMania 39 (aka WrestleMania Hollywood), one on each night.

According to the Wrestling Observer, WWE wants to split the World Titles and have 2 separate champions again, and the working idea is that Reigns’ WrestleMania 39 opponents are going to be Cody Rhodes & The Rock:

“One of the things talked about internally in WWE is for Reigns to wrestle both nights at Mania, with the working ideas being Cody Rhodes and Dwayne Johnson.

There is also talk of splitting up the Titles so RAW has a World Champion after Mania.

But anything until probably mid-January when plans have to be finalized because of the Rumble for this year is just talk.

Like the complete overreaction when I noted the Johnson winning the Rumble thing as the internal ‘pie in the sky’ idea which of course in a perfect world that’s what you would want to do, but that hardly means the perfect world scenario is what’s going to happen given Johnson has far bigger things on his plate like the XFL launch, movies, TV, whatever.”

Also Read: RAW Star Is Teasing Going Back To Her Old Character (Photos)

On this day in 2017, we lost Old School WWF/WCW Veteran “The Z-Man” Tom Zenk at the age of 59 due to arterial sclerosis and cardiomegaly.

In the fall of 1986, Tom Zenk joined the World Wrestling Federation with his tag team partner Rick Martel as ‘The Can-Am Connection’, but the team didn’t last long as Tom left the promotion in the summer of 1987.

After touring Japan (AJPW) and returning to Verne Gagne’s AWA, Zenk joined Ted Turner’s World Championship Wrestling in September of 1989 and wrestled for the promotion until they let him go in 1994.