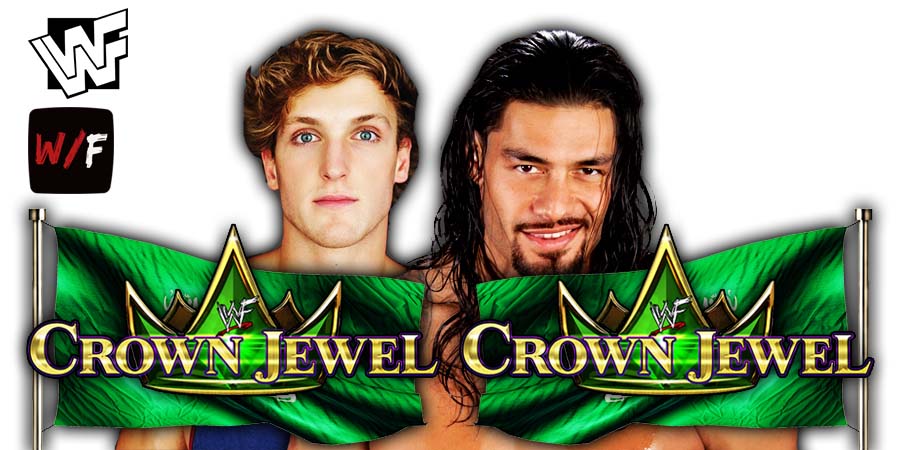 In two weeks, on November 5th 2022, Logan Paul will challenge Undisputed WWE Universal Champion Roman Reigns for the Title in the main event of the annual Crown Jewel PPV/PLE, that will take place at the Mrsool Park stadium in Riyadh, Saudi Arabia.

Logan is being trained by the legendary Shawn Michaels for this match. Roman saw the photos and tweeted the following about it:

“He’s gonna need all the help he can get. Hopefully he’s training with God next week.”

During an interview with SK Wrestling, Bloodline member Solo Siko was asked if Logan can defeat The Tribal Chief.

Below is what the former NXT North American Champion said:

“Man, two years of dominance versus two matches. Come on, man, he knows where he’s at. He’s in the deep end with the biggest shark in the ocean.

Like I said, it’s either sink or swim, man. We’re gonna find out what he’s made of.”

On Friday’s episode of SmackDown, Logan knocked out Jey Uso.

On this day in Pro Wrestling history on October 22, 2006, Total Nonstop Action! aired ‘TNA Bound For Glory 2006’ LIVE on PPV from the Compuware Sports Arena in Plymouth Township, Michigan.

This was the second annual Bound For Glory pay-per-view since its inauguration in 2005.

Former WWF/WWE Superstar Kurt Angle worked as the special outside enforcer for the main event, while fellow WWF Legend Jake ‘The Snake’ Roberts was the special referee in the Monster’s Ball match.

4-way: Team 3D defeated America’s Most Wanted, The James Gang and The Naturals