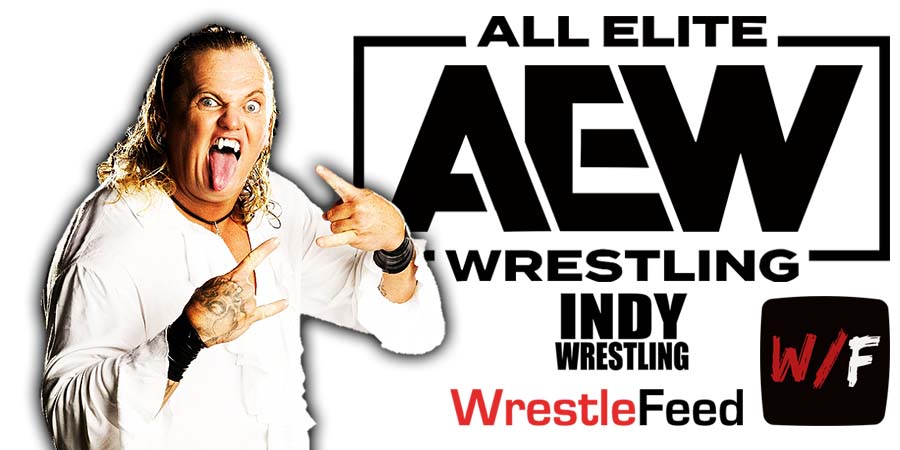 WWE Hall Of Famer Edge went Old School at SummerSlam 2021, when he came out to The Brood music and fire entrance.

Attitude Era Veteran Gangrel noted on his Fangin’ N’ Bangin’ podcast that this resulted in his upcoming AEW appearance being canceled.

“I get on a plane Friday, go into Philadelphia, then I’ve got a three and a half hour drive into Scranton. So I’m in the car. Next thing I know here my phone go off. I don’t know how to turn my Twitter notifications off.

So I started looking at them and then I see the whole Edge on SmackDown with the blood thing. The music and the black blood, the PG blood. I’m riding with a guy and he’s like ‘oh that’s so cool.’ And I’m just quiet. He’s like ‘why are you so quiet?’ I don’t respond.

So Saturday comes along and it’s SummerSlam. And Edge comes out with the badass Brood jacket, drinks from the cup, tribute to that. The Brood cross is in the back, the fire and the flames. And everybody’s going ‘oh it’s so awesome! We wish you were there!’

I was trending on Twitter on Friday night from SmackDown. I think I was trending in two categories or three, I don’t even know. Saturday I think it did too, in some kind of way. But again people I was with at this show they’re like ‘you’re quiet. Aren’t you excited?’ I’m like ‘oh no I’m really cool, I was very happy.’ But I’m holding this thing. I’m holding in something.

I was supposed to be on a plane to Milwaukee. Yesterday, I get a return phone call saying ‘oh man, we’re so sorry, we’re going in a different direction because WWE media stuff.’ That entrance, everything Edge did was f**king great.

The reason I wasn’t so excited about it is because I knew, I was offered another great opportunity and the timing sucked. The timing sucked. AEW contacted me and they wanted me to come in and do Dynamite today, tomorrow, Wednesday night. They were putting the entrance together, they were going to do the fire, they were putting the music together. They were getting it all together.