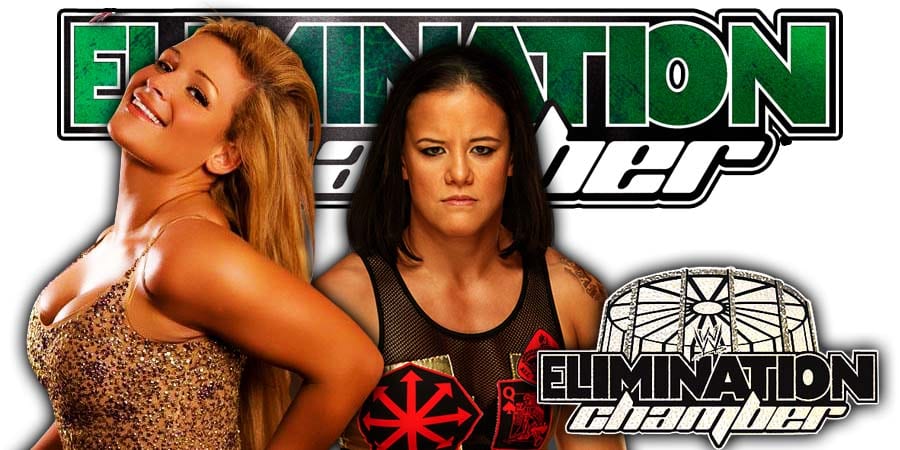 This is part 4 of our Elimination Chamber 2020 live coverage (part 3 is here).

Up next is the main event of the evening and it is a #1 contenders match for the RAW Women’s Championship. The winner of this match will face “The Man” Becky Lynch for the Title at WrestleMania 36.

Logan immediately goes after Natalya and drop her straight through a pod door.

Logan and Riott are now fighting on top of a pod. Ruby tries to escape by hanging on the Chamber Steel Chains, but Natalya catches her and powerbombs her on the chamber floor.

Logan then hits Natalya & Riott with a Crossbody from the top of the pod!

Shayna goes after Natalya and slams the pod door in Natalya’s face multiple times before making her tap out.

Shayna is now left waiting as Asuka & Liv Morgan are still locked in their pods and everyone else has been eliminated.

Morgan enters the match next and Shayna slams her head in the steel chained wall and the pod door! Becky Lynch is shown watching the match backstage.

Only Asuka is left now and she’s still in her pod. Asuka enters and she’s taking it to Shayna.

Asuka locks in the Asuka Lock on Shayna, but she manages to break it up by slamming Asuka on the chained chamber wall.

Shayna applies her choke hold on Asuka and Asuka passes out!

Baszler eliminated all 5 of her opponents and she’ll now face “The Man” Becky Lynch for the RAW Women’s Championship at WrestleMania 36.

She told you. She told all of you.@QoSBaszler has eliminated @WWEAsuka to earn her #Raw #WomensChampionship match against @BeckyLynchWWE at #WrestleMania! #WWEChamber pic.twitter.com/IKZ6g79wPw