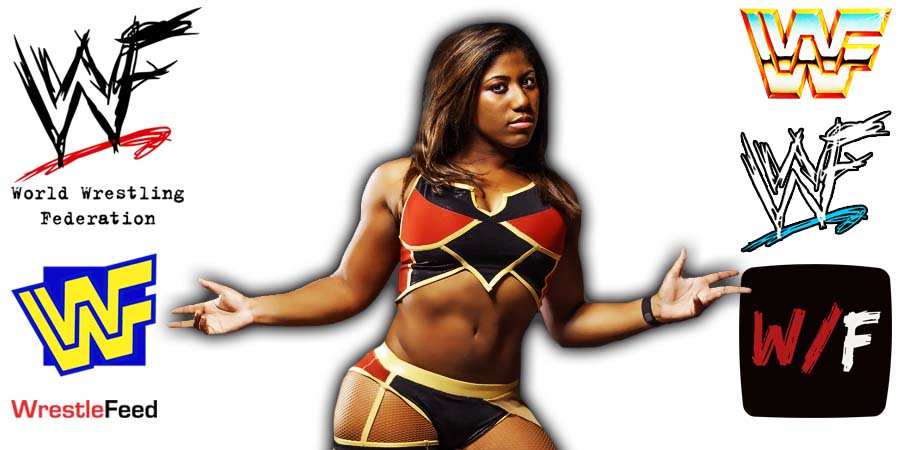 During an interview with Chris Van Vliet, former WWE wrestler Ember Moon talked about not being happy during her last few months in the company, WWE wanting women to dress sexy & more.

On WWE breaking up her tag team with Shotzi:

“My last 4 months were just one of those moments where I wasn’t having fun anymore. It started with Shotzi being gone and drafted.

I remember thinking — I was sitting at home and I got a phone call saying, ‘Hey, we don’t want you to be upset, but Shotzi just got moved to SmackDown and she’s debuting with Tegan Nox as a tag team.’

I was sitting there and I’m getting this phone call about her getting drafted, ‘Oh my God, I’m so happy for her,’ and then the tag team thing popped up and I was like, ‘but we’re the tag team and we have merch and we’re doing fun things and we had just gotten into our groove with the banter.’ They were like, ‘Don’t worry, we have something for you.’ ‘Okay, cool.’

I remember going to Hunter and he was like, ‘I have no clue what’s happening, we’ll figure it out together.’

The problem I had was, some of these new writers were coming from RAW and SmackDown, ‘we had no idea you and Shotzi were a tag team.’ A lot of WWE backstage is having to play the game.

‘It’s cool, we get it, we’re down in NXT. It’s not like we were front page (of the website) when we won the titles. That’s fine, yes.’ You’re just having to eat the sh*t sandwich and smile with sh*t in your teeth a lot of times. It’s all about not making waves.”

On plans for her heel turn and Vince McMahon pulling her from TV:

“Me, [Triple H], and the head writer at the time had come up with doing a heel turn with me because it was new and different. During this process, we wanted to do a losing streak. That was my thought.

I see the new faces coming through and part of my job at NXT was to help new talent on TV. I love this business so much that I didn’t mind. Let me do a losing streak, let me get frustrated, and let me turn.

‘This is a great idea.’ Then the first match happened and I’m off TV for 4 weeks. ‘Don’t worry, we got this.’ Then, Hunter disappeared.

One of the head coaches goes, ‘will you do me a favor and work 205 Live with Cora Jade. We like her, she’s a sweet girl, we think this will be a fun match, you two are in the main event.’

Cool, that sounds great, I’m never going to say no to having a match on TV, regardless of where it’s airing. We have a fun banger of a match.

They go, ‘you’re turning in this match, but we want to make it subtle.’ They kind of turned me, but they don’t, there was confusion about what would happen.

Then, off TV for 3 weeks, I have the match with Mandy (Rose) and they’re like, ‘We’re finally pulling the trigger on this.’

I get a note that week saying, ‘In two weeks, we need you to dye your hair fire color again, get the red contacts, you’re going back to the old Ember Moon character. This is per Vince.

You’re going to turn heel, but turn heel as your old character. We’re trying to get the old music and stuff together.’ Alright, great, this is great.

I show up to TV, I’m motivated, just had to wait it out. Ryan Katz and I went and filmed a demo of the vibe that I wanted. Comeback, I get the video ready, I’m ready to show everyone after TV and they’re like, ‘Hey, we have some bad news. Vince is pulling you off TV indefinitely.’

On WWE wanting women to dress sexy like Mandy Rose:

“I remember going to my makeup artist and saying, ‘I am so unhappy.’ We would have to sit through stupid meetings about how we’d have to dress sexy. I remember looking at someone else (and laughing).

I cater to children. I’m not about to wear fishnet booty buttcheek shorts because we had a two-hour meeting about how to dress like Mandy Rose. That’s not fair. Mandy is absolutely phenomenal and an amazing person, but not everyone is Mandy Rose. I started seeing this downslope as soon as Hunter was gone.