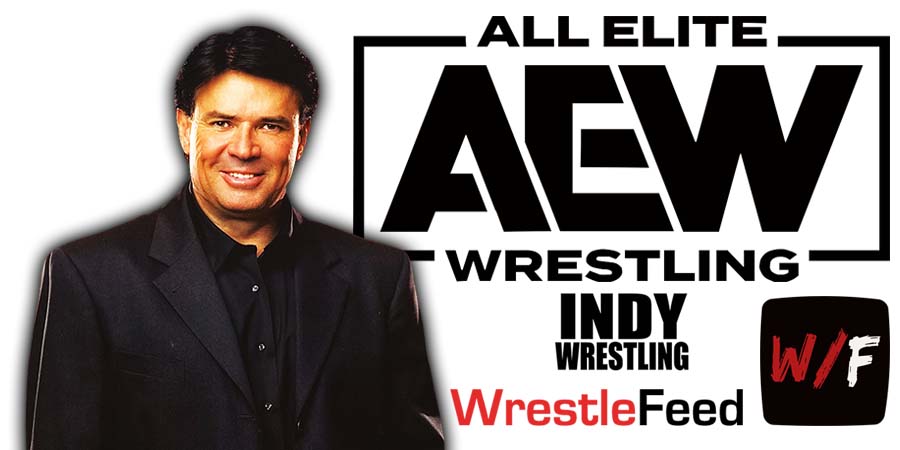 On a recent episode of his weekly ’83 Weeks’ podcast, Eric Bischoff revealed his thoughts on All Elite Wrestling giving away Kenny Omega vs. Bryan Danielson (Daniel Bryan) on Free-TV.

Eric himself became famous for doing this during the ‘Monday Night Wars’, when at times he cared more about the weekly Monday night TV-Rating than he did about the monthly PPV buys.

The best example would be booking Goldberg winning the WCW World Title from Hollywood Hogan on an episode of NITRO, yet never booking a rematch on pay-per-view.

Here’s what the 2021 WWE Hall of Famer said about the AEW match:

That’s where all of that started, and it built over the years. Everybody went, ‘Yeah, they should have done that (in reference to putting on the Hulk Hogan vs Goldberg match on free TV in 1998 as opposed to PPV). People don’t really understand the business even though they think they do sometimes. It’s been a thing.

It’s one of those things I get hit with pretty regularly on social media. ‘Yeah, but you gave away Goldberg and Hogan on TV. You’re the reason why WCW died. That was a perfect example of why it died’, all because of the internet wrestling community.

First of all, before I fast forward, it worked. Yes, we were a television company. Turner Broadcasting’s primary goal was television. Yes, they wanted to make money in the process. Obviously, they did, but, when given a choice, PPV or TV, 99 times out of 100, it’s going to be put on TV. That’s the driver. That’s why WCW existed from the very beginning was because Ted Turner believed that wrestling would bring eyeballs to the network.

Read his autobiography. Anything that you read about Ted, if you do any amount of research, that’s one of the reasons why Ted believed in wrestling, not because he liked wrestling per say, although he did, but because he understood that it would attract eyeballs. Early on in Turner Broadcasting’s history, that was his first and foremost goal, and that continued.

Now here we are in 2021, you’ve got a new company in AEW. You’ve got Turner, and obviously, this is not the same Turner. This is Warner Media. None of the executives I dare say probably know the high level executives that are in Turner today, or even probably out of high school at the time we were there, or college at least. You have a whole different set of management. You have a different set of circumstances. Everything is different except for one thing. It’s still a television company.

Television rights are the largest line item in WWE’s quarterly SEC statements. That’s where the majority of their money is coming from is television rights. In AEW’s case, that’s definitely the case. Nothing’s changed folks. The only thing that’s changed is how people write about it because of their relationships and their proximity.

Nothing has changed. It’s the same, and I think it’s a great move by the way. Congrats Tony Khan for having the balls to do it.”