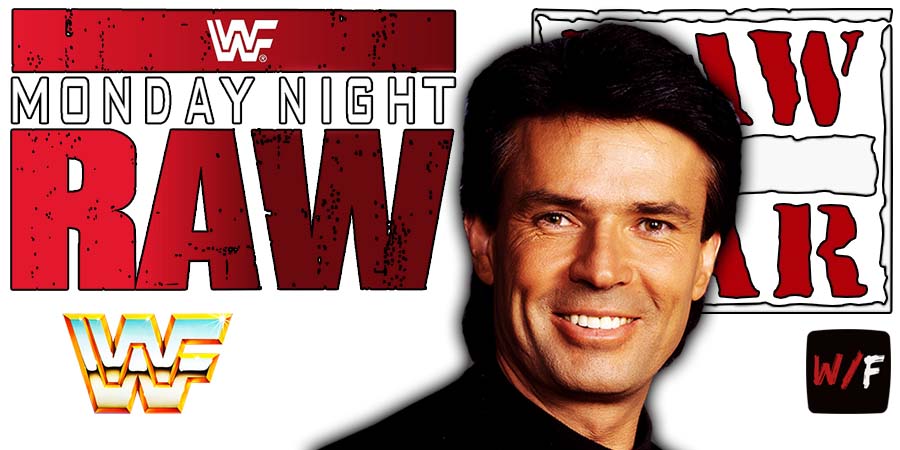 On an episode of his weekly ’83 Weeks’ podcast, Old School WCW Legend Eric Bischoff revealed how his recent return to WWE and its flagship show Monday Night RAW came together.

Bischoff appeared as the wedding official on the December 27, 2021 episode and received a Brood Bath from Edge during the segment.

Here’s what Easy E had to say:

“So he called me and I saw [on the caller ID] it was Bruce Prichard, it’s a couple of days before Christmas and I’m thinking, ‘Oh he’s calling to wish me a Merry Christmas.’

I answer the phone and he says, ‘Hey Eric! So…’ and I knew as soon as he said ‘so’, I knew by the tone of it that something was coming. He says, ‘So, you think you could make TV Monday?’.

I said, ‘What is it?’ He goes, ‘Well,’ — and you know how Bruce talks — ‘why don’t you get a really light colored pastel suit and expect it to get trashed. There’s going to be a wedding.’

That’s all he told me, no details. Not who, nothing. Just go get a suit, because I didn’t bring a suit with me to Florida, right? It’s Christmas, what the f**k do I need a suit with me for? So now I need to go find a suit before Christmas Eve on Thursday, that was fun.”

The 2021 WWE Hall of Famer used to be the official General Manager on RAW from mid-2002 until late 2005 and has since returned occasionally in smaller roles and cameos.

Also Read: Eric Bischoff Reveals His Major Mistake During His 2019 WWE Run That Led To His Release

This episode was broadcasted from the Peoria Civic Center in Peoria, Illinois and featured pre-taped matches & storyline segments on the road to the ‘WWE Royal Rumble 2007’ PPV.

6. SmackDown Sprint: The Undertaker vs. The Miz