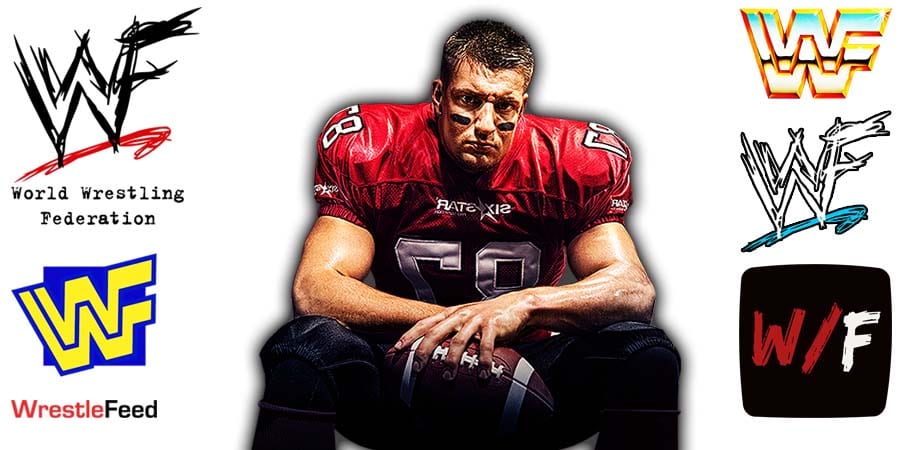 Former 24/7 Champion, WWE celebrity Rob Gronkowski set a Guinness World Record by catching a football that was dropped out of a helicopter at 600 feet.

Here’s what FOX News reported about it:

Gronkowski, who played college football at the University of Arizona, was brought in to get the players on the team hyped up for the annual scrimmage, and that consisted of the former All-Pro setting a Guinness World Record for ‘the highest altitude catch that’s ever been done in the world’, according to Arizona head coach Jedd Fisch.

A football was over 600 feet up in the air in a helicopter that was circling around Arizona Stadium in Tucson. Gronkowski failed to haul in the first two footballs that were dropped from the sky, but after he secured the third ball, Arizona players and coaches ran up to Gronkowski in excitement and he spiked the football into the turf, which is what he famously does after scoring touchdowns.”

Rob Gronkowski and Tedy Bruschi are the honorary head coaches for the University of Arizona’s spring game. But before the game, Gronk set a world world record because…he’s Gronk. pic.twitter.com/RuSCZPUFQU

Ron’s World Championship Wrestling debut at the end of the Halloween Havoc 1995 PPV was pretty memorable, as he came out in a mummy costume as “The Yeti”, helping The Giant (now known as The Big Show) to attack Hulk Hogan.

He also portrayed other characters in WCW, such as “The Super Giant Ninja” and “Big Ron Studd”, before joining Raven’s stable “Raven’s Flock” as Reese in 1998.