During a recent edition of The Pat McAfee Show, WWE analyst Pat McAfee talked about Michael Cole being angry at him for wearing shorts at WrestleMania 35 and said he almost quit WWE after that altercation.

Below is what Pat said:

“[Michael Cole said] ‘I told you no shorts!’ I said you told me no jorts. He said ‘you look unprofessional, you look sloppy.’ He was like yelling at me in front of all these people that I looked up to. 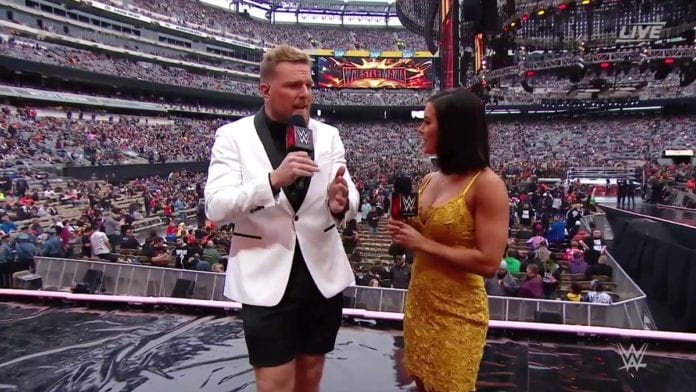 I then walked back to where watch-a-long was happening and I grabbed my bag and I told the digital guy…I said ‘you can tell Michael Cole to go f*** himself. I am leaving. I am not getting punked and yelled at like a child in front of everybody.

You guys think I’m some schlub. This is a second job to me, I’m very lucky to be here, very excited to here but I’m not going to get yelled at like I’m a f***ing child.”

Alex revealed his story in multiple tweets and you can read them below:

And we don’t use those on broadcasts…we do..and it’s gymnastics terminology used in wrestling….I was yelled at for buying a Whataburger after a show at #nxtjacksonville…. I was yelled at for not doing my new NXT pre-show music contest even though I was told by production

(Berkley) that he wanted to wait until the following week until he had more music in the computer, but I was yelled at for not doing it. I was only yelled at by Cole once. These were by other announcers who had it filtered down to them because the culture created

They look for the smallest things to criticize, berate and bully. If they like you, they look the other way. If they don’t they find ways to get you in trouble and cause this stigma about you within the company until you’re ultimately gone.

Cole I would argue has hired good talent, is underrated as a PXP guy when the reigns are taken off and when he wants to be an EXCELLENT teacher…but he also has a stupid temper, is fake when it comes to building a real culture of “team” and fosters a culture of not trusting

Anyone and being constantly afraid of losing your gig at every turn. There are several other stories from other folks in his circle that have more direct interaction with his temper. This McAfee story doesn’t surprise me AT ALL.

I want to add one more thing here that I think is important…I’m usually pretty good at dealing with “yelling” I was an athlete in HS, not a good one, but i didn’t mind the yelling if it was supported by coaching and honest criticism in order to help me improve.

So I don’t want it to come off like I was sulking in the corner every time someone said or did something to me. Not like that at all, I’m just someone that speaks my mind and will always stand up for myself, especially if you’re just being a jerk for no reason.