• Former WWE Wrestler Comes Out Of Retirement & Debuts In AEW

Soon after his release, he announced his retirement from pro-wrestling. Here’s what he wrote:

“I’m not concussed or ‘banged up’. I simply just can’t keep going anymore. Take your mental health seriously, both for yourselves & for each other, because we only have one life to live. Thank you to anyone who did support me for 5 years. I didn’t do much, but what I did was fun.

I’m stepping away from wrestling completely right now so please don’t ask me to do interviews/appearances. I’d like my privacy to be respected. At 26 years old, I’ve got my entire life ahead of me & I’m choosing to explore completely different industries to find my passion again.

Unfortunately, it was unhealthy for me the entire time. I just learned how to hide it really well. I hope that friends & fans I’ve made alike continue to support me no matter what.

I have major anxiety just having done that, please be sensitive. Thank you.”

Atlas has now made his return to pro-wrestling, as he debuted in All Elite Wrestling during Tuesday’s AEW Dark: Elevation tapings.

He defeated Serpentico in a singles match. After the match, AEW President Tony Khan came out. He congratulated Atlas and shook his hand. 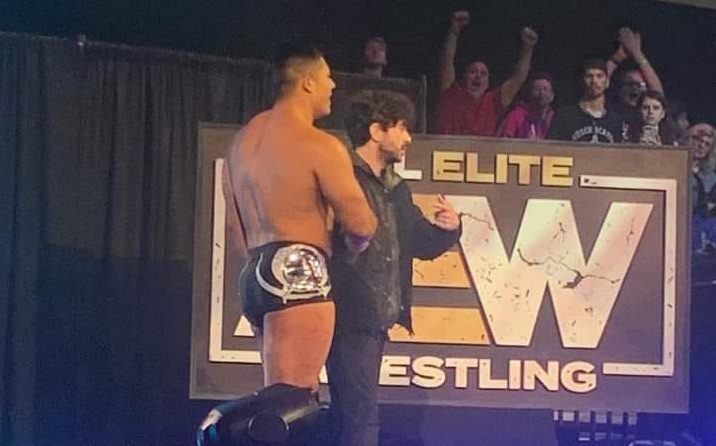 Earlier this year, former WCW/TNA star Daffney passed away at the age of 46. Prior to her death, she went live on Instagram. She seemed in a dark place mentally and teased committing suicide.

According to PWInsider, WWE sent the following text message to their wrestlers after this incident:

“As a reminder to our Talent, if you are dealing with a difficult personal matter and would like to speak with someone to get the support you need, please don’t hesitate to contact [Counseling Company Name Withheld] at [NUMBER DELETED] or WWE Medical.”

This led to Jake Atlas defending WWE and sharing the following story on Twitter:

“I certainly don’t want to make this about me but this is important to speak up about. WWE paid for 6 months of my therapy & quite literally saved my life. Not everything is what it seems. People who are truly suffering from mental illness learn how to to hide it well. Reach out.”

It was broadcasted from the Pepsi Arena in Albany, New York and featured matches, interviews & storyline segments on the road to the ‘WWF Royal Rumble 1999’ PPV.