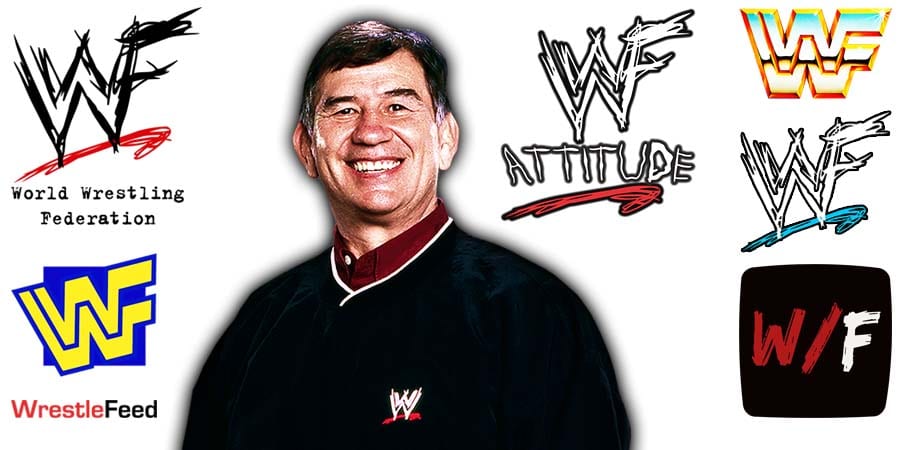 During an interview with WrestlingInc, Old School NWA/WWF Legend Gerald Brisco, who was released from WWE in 2020, revealed the reason why his and Pat Patterson’s push as the ‘Stooges’ of evil on-screen promoter Mr. McMahon eventually stopped.

Here’s what Brisco had to say on the Attitude Era gimmick of The Stooges:

“It happened by accident, just purely by accident, and that’s how most really good things happen. We just stumbled upon it.

Was it written to be that way? No. Was it talked about to do that? No. It just happened. Because Pat and I had a reputation of being so close to Vince.

Pat and I were, in the early days of WWF, Patterson and Brisco are Vince’s right-hand men, and we were. We were with him all the time.

So, Stone Cold Steve Austin started coming along and I remember the first night where we kind of got classified as Vince’s stooges or associates, because Jim Ross didn’t want to use the word stooges in the beginning.

If you go back and listen, J.R. always said, ‘Patterson and Brisco, Vince McMahon’s associates,’ because of the respect levels he didn’t want to call us stooges.

We’re in Chicago and Stone Cold had done something, so Vince said, ‘Come on, we’ve got to have a corporate meeting. You guys come in here’.

So, all of a sudden, we became part of Vince’s corporation. We did the little two-minute skit and the chemistry between the three of us just worked.

So, when we came on and the ratings started spiking. Then the next week we had another little bit/piece with Vince and it spiked again, and it just started growing. Then they started writing it in.

I think what the demise of The Stooges was that Vince was going against The Rock and Stone Cold, and they wanted him to be a sheer badass guy.

But Pat and I started getting over as babyfaces, so we thought it was taking some heat off of Vince’s character.

So, it was time to separate the funny old guys from the mean, old, and tired boss. So, I think that was our demise.

We got over too damn good! We were being goofy and funny and started getting over. It was weird.

I mean, you could walk out in those arenas in Pennsylvania, somewhere in New York, or Boston, and look up in the rafters and see all these Stooges signs and Brisco & Patterson signs.

I wondered, ‘What the hell?’ and consider the talent on the roster, Dwayne Johnson, Stone Cold Steve Austin, Bret Hart, Shawn Michaels, The Undertaker, everybody.

And we were getting over. We had the highest rating on Monday Night RAW, ever.”

He was also a part of WrestleMania 23 during the “Battle of the Billionaires” match.

He was inducted into the Celebrity Wing of the WWE Hall of Fame in 2013 and in 2016 he became the 45th President of the United States.