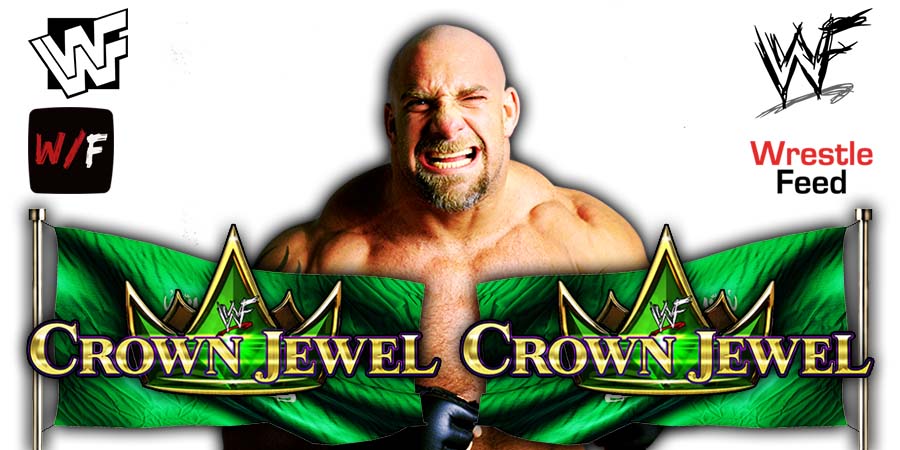 During a recent appearance on the CarCast podcast, WWE Hall Of Famer Goldberg addressed the negative reaction from some fans to WWE doing PPVs in Saudi Arabia.

Here’s what Goldberg had to say about this situation:

“It was different, man. It was my 3rd, 4th time to Saudi. Every time we go, there’s seemingly a cloud of negativity, but I gotta tell you, from the first trip to this last trip, what the Crown Prince is trying to do and what he’s actually doing is moving that country ahead exponentially. I don’t want to say it’s ‘westernizing’, but it’s westernizing.

It’s truly giving them some freedom and just the difference in women’s presentation from the WWE from the first show to this last show, I mean, they didn’t even let them wrestle on the first one. They didn’t even have to cover up most of the time on this last trip.

Whether it’s Pitbull coming in the night before, whether it’s 700,000 people at this event, this festival that they had the night before, or us going in twice a year, I mean, they’re really doing some cutting edge stuff, and he’s bringing in entertainment throughout the world. It’s an honorable gesture, I believe, and I think it’s making the Middle East move in the right direction.

Formula 1’s going there. How can you get much bigger than that? They wanted [Tyson] Fury and Deontay Wilder there for the end of the trilogy. There’s nothing unattainable, financially, by him, in any respect, so the sky’s the limit, and hats off to him because we catch a lot of sh*t for going over there, but as far as I’m concerned, we’re part of a revolution. And I think it’s doing wonders for the region.

Going from no entertainment to what they’re going to now, it’s a pretty big jump, but the people even that weren’t associated with the event, just people walking around, it was a very positive experience, man.

It was completely different than the first time we went.”

Goldberg recently revealed that he has one more match left on his current WWE contract.