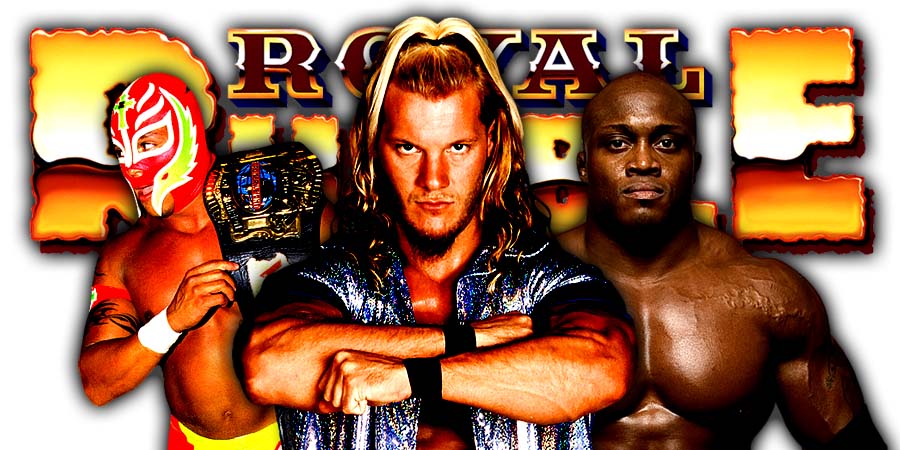 This is part 7 of our Greatest Royal Rumble live coverage (click here for Part 6).

Up next is the main event of the evening – the 50 man Greatest Royal Rumble match!

Entry #1 is Daniel Bryan and #2 is Dolph Ziggler. Sin Cara enters at #3 and gets eliminated

#6 is RAW wrestler Mike Kanellis. Mike enters the ring and immediately gets eliminated from the match by Henry! This might be a record!

Entry #7 is Japan’s Hiroki Sumi. He stands at 6’4 and weighs 398 lbs! Henry & Sumi have a faceoff and they do the test of strength and Henry eliminates Sumi and Bryan & Ziggler eliminated Henry from behind!

#8 Is Viktor of Ascension. He gets eliminated by Viktor.

#12 is Hornswoggle. He helps eliminate Wilder!

Hornswoggle hits a Samoan Drop on Kofi. Honrswoggle gets eliminated by Nese.

#15 is Bo Dallas. #16 is RAW General Manage & WWE Hall of Famer Kurt Angle! The fans go nuts for Angle. Ziggler mocks Angle and Angle hits a Belly to Belly overhead suplex on Ziggler over the top rope and Ziggler is eliminated!

Bryan & Angle are going at it in the ring right now. Angle puts Bryan in the Ankle Lock, but Bryan escapes. Angle nails an Angle Slam on Bryan, but gets eliminated by Elias after that.

#30 is Tyler Breeze of Breezango. Mojo eliminates Breeze as well.

#40 is NXT’s Dan Matha. #41 is “The Monster Among Men” Braun Strowman. Strowman and Babatunde have a faceoff and Strowman quickly eliminates him. Strowman then eliminates Big E.

Everyone tries to eliminate Strowman, but they fail. Titus & Tye get eliminated by Strowman.

#43 is Curt Hawkins and #44 is Bobby Lashley. Lashley gets pyro in his entrance. Lashley goes after Elias and botches a back drop as he fails to pick up Elias.

#45 is former World Heavyweight Champion The Great Khali. He comes out to a big pop and the crowd is dancing to his theme song!

Khali chops down Bryan, Lashley & Strowman. Khali then gets eliminated by Strowman & Lashley.

Daniel Bryan now holds the record for the longest time in a singles Royal Rumble match.

Shane O’Mac delivers a Coast to Coast to Strowman and Strowman goes out of the ring from under the bottom rope.

Lashley nails a Brainbuster on Cass.

Shane is on the top turnbuckle and is looking to hit Coast to Coast on Owens, but Strowman comes running at him and chokeslams him through the announce table!

Cass tries to clothesline Strowman out of the ring, but Strowman puts Cass on the top rope and then shakes the ropes and then eliminates him!

Strowman is presented with the Greatest Royal Rumble trophy and the Championship!

The celebration is ON for @BraunStrowman, the WINNER of the Greatest Royal Rumble Match!#WWEGRR pic.twitter.com/rY9bwGvARG

CONGRATULATIONS to @BraunStrowman on making history as the WINNER of the first-ever Greatest Royal Rumble Match! #WWEGRR pic.twitter.com/X3gEmMqNRl