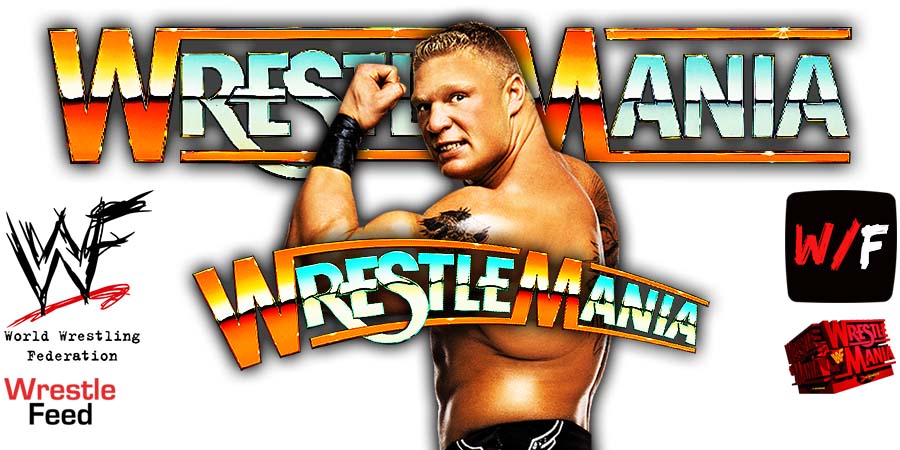 • Has The Plan For The WrestleMania 38 Main Event Changed Due To Brock Lesnar Winning The WWE Championship?

Brock Lesnar was scheduled to face Roman Reigns for the Universal Championship in the main event of the WWE Day 1 PPV, but that didn’t happen due to Reigns testing positive.

Even if that match had happened, the plan was for them to face one more time at WrestleMania 38, in a singles match with some kind of a stipulation or a Triple Threat Match with Drew McIntyre getting involved.

However, with Brock winning the WWE Championship at Day 1, everyone is wondering if the feud between him and Reigns is over and if Lesnar will be a part of RAW moving forward.

We are being told that WWE still plans to move forward with their original WrestleMania 38 plans, while making the required changes on the road to WrestleMania due to the sudden change of plan (Lesnar capturing the WWE Title).

So, Lesnar vs. Reigns will happen, but Lesnar will work matches with other Superstars before he moves back to The Tribal Chief.

Brock Lesnar vs. Bobby Lashley is expected to happen soon (either at the Royal Rumble PPV or the Super ShowDown PPV in Saudi Arabia), but there have also been talks of Big E getting a rematch against Lesnar.

However, they could drop this rematch idea because Lesnar already pinned Big E and WWE wants to keep Lesnar a babyface, so beating a babyface Big E in a singles match wouldn’t be a good idea at this point.

Also Read: Big WrestleMania 38 Plan Could Be In Jeopardy

During his career, he worked for pretty much all the big promotions in the United States, including the AWA, World Championship Wrestling & the World Wrestling Federation.

His most famous appearance was when he teamed with King Kong Bundy & Little Tokyo at WWF WrestleMania III to take on Hillbilly Jim, Little Beaver & The Haiti Kid.

The last time we saw Lord Littlebrook on TV was when he managed The Royal Family (Jack Victory & Rip Morgan) in WCW during the late 80s.