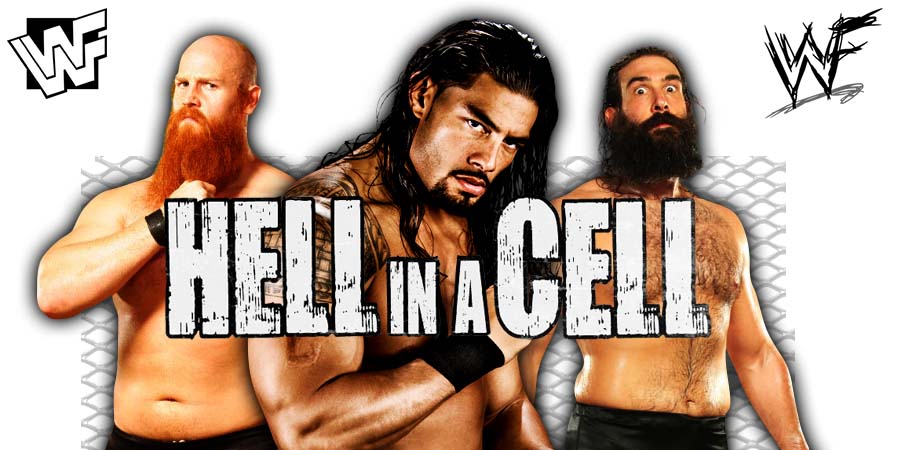 Up next is the Tornado Tag Team match. “The Big Dog” Roman Reigns makes his way out first and he gets a big pyro entrance. Out next is his tag team partner, Daniel Bryan.

Erick Rowan & Luke Harper make their way out next and they’re announced at a combined weight of 600 lbs!

The match begins and Reigns goes after Harper and Bryan goes after Rowan. Rowan quickly takes out Bryan and Rowan & Harper team up on Reigns.

Bryan comes back with a Suicide Dive on Harper. Rowan picks up Bryan and Reigns hits Rowan with a Superman Punch on the outside.

Rowan goes for a Splash on Reigns, but misses. Reigns hits a Samoan Drop on Rowan and goes for the cover, but Rowan kicks out.

.@ERICKROWAN with a Dropkick. #HIAC pic.twitter.com/LRGra8OeA0

Reigns is looking to hit a Spear on Rowan, but Harper stops Reigns mid-way with a Superkick. Harper goes for the cover on Reigns, but Reigns kicks out.

Rowan hits Reigns in the head with the Steel Ring Steps! Harper & Rowan are going for a big double team move on Bryan, but Reigns punches Harper off the top rope and saves his tag team partner.

Bryan locks in the LeBell Lock on Rowan, but Harper breaks the submission hold.

Reigns hits Harper with 10 Clotheslines in the corner. Rowan sends Reigns out of the ring after this.

Bryan hits Harper with the YES! kicks, but Rowan takes him out. Reigns hit Rowan with Drive By on the apron and Harper then takes out Reigns with a Suicide Dive! Harper banged his head at the edge of the announce table during this dive.

Harper & Rowan are now clearing the announce tables. They send Bryan face-first into the ring apron.

Rowan slams Roman on the floor and then slams Harper on top of Roman!

Rowan now takes off a barricade and hits Reigns with it and sends Reigns into the crowd.

Bryan is now hitting Harper with running corner dropkicks in the ring. Harper plants Bryan with a massive powerbomb from the middle rope! Harper goes for the cover, but Bryan kicks out.

Harper hits a Dragon Suplex and drops Bryan on his face. Harper hits another one. Harper goes for a third one but Bryan counters and hits Harper with a dropkick.

Reigns hits a Superman Punch and Spear on Harper to pick up the win for his team!

Bryan offers Reigns a handshake after the match, but then stops. Bryan now wants a hug! Reigns doesn’t want to do it, but turns around and does it! 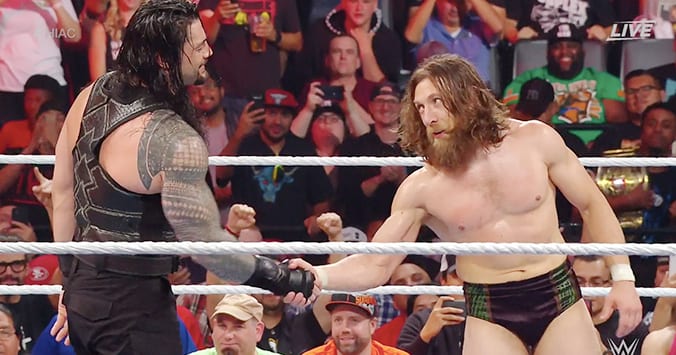