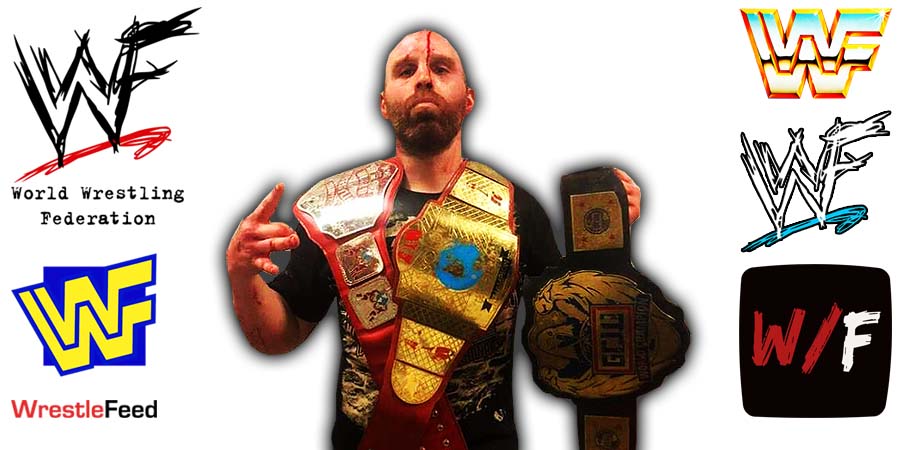 On a recent episode of his weekly ‘Hall of Fame’ podcast, Old School WCW Legend Booker T spoke very highly about Hardcore Wrestling veteran Nick Gage, who has lost his AEW debut match against Chris Jericho in what was described as a bloody ultraviolent battle, that included light tubes, a pane of glass and even a pizza cutter.

Here’s what 2-time WWE Hall of Famer had to say about Gage:

“I’ll tell you this. Nick Gage, I have never met this dude before in my life. But I’ll tell you if everyone in this business had the same thought process as Nick Gage, the business would be in a much, much better place. We are in an era of social media. We are in an era everybody wants their word out to their followers, they want to post something.

This guy, Nick Gage, you pull up photos of this guy, and you’ll never gonna see him smiling in any of them. He’s got the same look on his face in every photo, every picture I have seen him in. There is not a picture of him being happy.

It’s a picture of a guy who’s ready to go into a deathmatch, each and every night. He’s the real deal. As far as what he does and what he brings to the table. So I cannot disparage him at all.”

Nick Gage was not known to anyone outside the Indy Wrestling community, until he was featured on a Season 3 episode of Dark Side of the Ring, which made him famous over night.

We reported that Domino’s Pizza even threatened to quit as an AEW sponsor, because of the above mentioned Hardcore Battle against Y2J.

Here’s what the Hardcore Wrestler tweeted about the situation:

Also Read: Nick Gage On What Tony Khan Said To Him After His No-Rules Match In AEW

This episode was broadcasted from the Atlantic City Boardwalk Hall in Atlantic City, New Jersey one night after SummerSlam 2006 and featured matches & storyline segments on the road to the ‘WWE Unforgiven 2006’ PPV.

Paddle On A Pole Match: Candice Michelle vs. Torrie Wilson