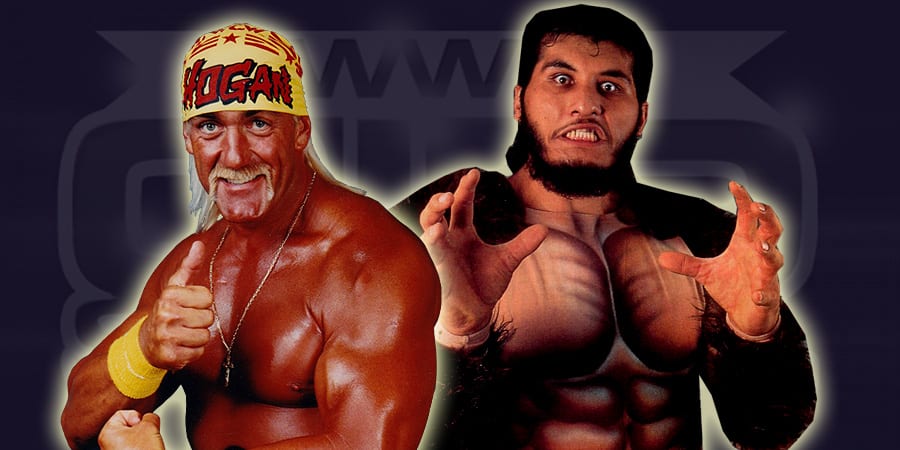 Yes, you read it correctly. Giant Gonzalez vs. Hulk Hogan, it almost happened!

In 1993, Vince McMahon had planned a huge main event for WWF SummerSlam where “The Immortal” Hulk Hogan was scheduled to face “The Hitman” Bret Hart for the World Wrestling Federation championship. However, Hogan refused to drop the belt to Bret because he doubted his drawing power and was worried that Bret might get booed even as a babyface if he goes one on one with the Hulkster.

So instead of Bret, Hogan decided to drop the title to the superheavyweight monster heel Yokozuna at King of the Ring PPV and left WWF shortly thereafter. If Hogan had agreed on Vince McMahon’s original storyline, then his next feud was supposed to be against the “eight foot tall” Giant Gonzalez.

Although the proposed Hogan vs.Gonzalez feud never materialized, the two did interact once inside a WWF ring. During a non-televised houseshow, Hulk Hogan and Brutus Beefcake, together known as “The Mega Maniacs”, fought Money Inc. During this match, Giant Gonzalez appeared as an enforcer for Money Inc. It’s interesting to note that this event took place on June 15, 1993 – two days after Hogan lost the WWF Title to Yokozuna at King of the Ring PPV. After Hogan & Beefcake cleared the ring, Hogan and Gonzalez had a confrontation. However, rather than fighting Hogan, the Giant left the ring and headed to the backstage area. Below is a rare pic of Hogan & Gonzalez from that houseshow: 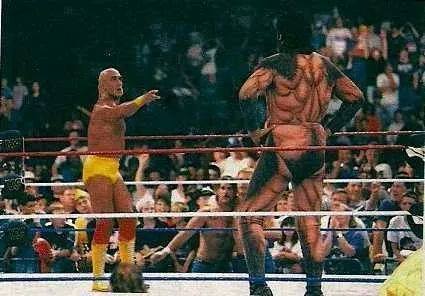 At WWF WrestleMania IX, Giant Gonzalez lost to The Undertaker, but he didn’t lose clean as he was disqualified for knocking out The Undertaker with chloroform. This was due to the fact that Gonzalez was not originally scheduled to come out on the losing end of his feud with The Phenom. But Vince booked this finish so as to keep both Taker & Gonzalez strong. With Gonzalez not losing clean, he was still strong for a potential program with Hulk Hogan in the future.

But when Hogan left, things didn’t go well for Gonzalez. There was some talk of doing Lex Luger vs. Giant Gonzalez in 1993 but Vince decided to cancel that program as he thought that the feud would ruin Luger’s strong momentum at the time because of the high potential of them working a bad match. So Vince decided to cut short Gonzalez’ monster heel push by having him lose to The Undertaker at WWF SummerSlam 1993. He immediately became a babyface after the match as he turned on his manager Harvey Wippleman.

Gonzalez was eventually released from his WWF contract in October, not due to poor performance, but due to his health issues. He later returned to the ring in Japan (for NJPW) before retiring in 1995 due to health issues.