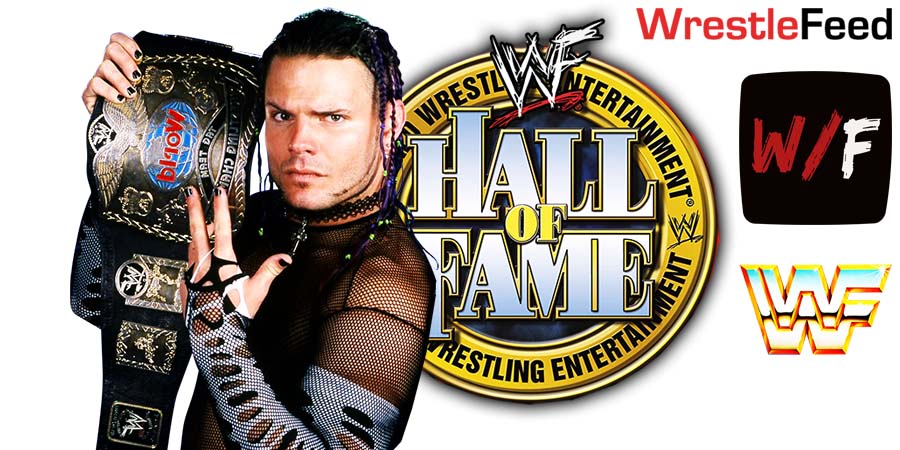 • “I felt offended. How dare you?” – Jeff Hardy On WWE’s Hall Of Fame Offer After Firing Him

During the appearance on The Extreme Life of Matt Hardy podcast, Jeff & Matt had a conversation about this Hall of Fame offer. You can read it below:

After my 90 days are up, the Hall of Fame is in April and I do go to AEW, how’s that going to work? What are y’all trying to hit me with as far as if I sign with AEW when I’m free and me going into the Hall of Fame and how would that even work?

My mind and my emotion went crazy and I was in tears man, like this is my career. I know I had been a very influential person to a lot of young misunderstood individuals but yeah, it just felt so wrong. Like how dare you?

I know that sounds crazy because I guess when people get offered the Hall of Fame it’s like ‘oh, I’m a Hall of Famer’ but it’s never really meant that much to me.

It’s not time for that, that’s why it was a hard no. Especially, it feels like something Matt and I should go in together as The Hardy Boyz when the time is right. It was just weird man, I still don’t know how I feel about that overall.

It just felt so wrong.”

“You just didn’t feel valued. You are one of the most beloved wrestling superstars of all time and that lack of feeling valued to your maximum ability and just being able to leave and come here (to AEW) and seeing how this is.

Just like the Hall of Fame thing, I almost feel like they jumped the gun before they let you go and got the drug test results back and it was almost like what can we do to reel him back in and that’s probably what was emotional about it too.

I want people to offer things like that because it’s coming from the right place, not because there’s motive behind it or they’re trying to reel you back in.”

“Maybe I should’ve said this ‘wait a minute, what if I’m in AEW at the time of the Hall of Fame? How does that work?’ What if, yanno.”

“That would’ve been interesting. I would imagine they would’ve had you under a nice little contract where you couldn’t have came to AEW. That would be my guess.”

Also Read: “The smartest thing I have ever done” – Jeff Hardy On Walking Out During A WWE Live Event Match

3. The Smoking Gunns vs. The Heavenly Bodies