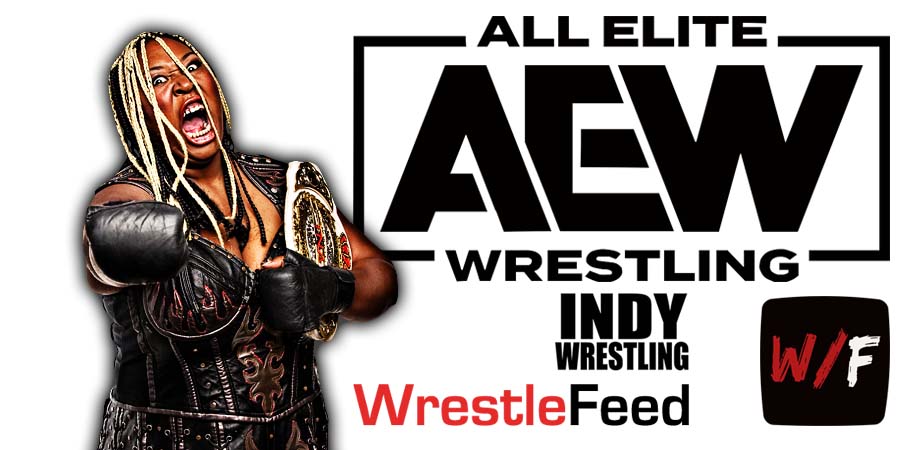 • “I felt unheard. I wasn’t in control” – Awesome Kong On Her Time In AEW

During an appearance on Chris Van Vliet’s Insight podcast, former WWE wrestler & TNA Hall Of Famer Awesome Kong (aka Kharma) talked about her time in AEW.

She appeared on AEW programming for less than a year and her contract wasn’t renewed in 2021.

Kong wrestled just 5 matches in All Elite Wrestling. As a matter of fact, the final match of her career took place in Tony Khan’s promotion, where she defeated Skyler Moore on AEW Dark.

Below is what she said about working in AEW in their 1st year:

“I don’t want to sound like I’m bashing the crew over there at AEW, especially since we were just up and running.

We are all new executives and trying to think outside the box and really give it to y’all. Something new, something that hasn’t been seen. We’ve seen it all. We were trying to give you something that you haven’t seen.

I felt unheard. I wasn’t in control. All I could do was say, ‘I have this idea of XYZ.’ I couldn’t get in the room where final decisions were made. Believe me, Kia (her real name) stalked that room. I would stay there after big meetings and pick up the water bottles and cups like, ‘Huh, Y’all need…you need me to go? Okay’ [Laughs].

I tried to get into that last meeting where decisions were made. Never had a chance to. ‘That’s just not going to happen, so I’m not going to push it.’

This episode was pre-taped at the Columbus Civic Center in Columbus, Georgia and featured matches & storyline segments on the road to the ‘WCW Bash at the Beach 2000’ PPV.