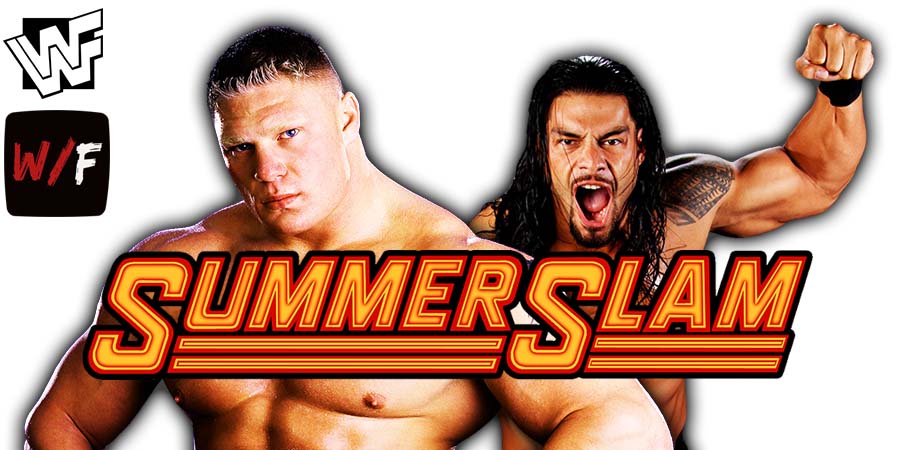 • “I hope and pray that Brock chokes him unconscious” – WWE Hall Of Famer On Roman Reigns vs. Brock Lesnar At SummerSlam 2022

On July 30th, in the main event of SummerSlam 2022, Roman Reigns will defend the Undisputed WWE Universal Championship against Brock Lesnar in a Last Man Standing match.

During an interview on Good Morning Football, WWE Hall Of Famer Bill Goldberg was asked to give his prediction for this match.

“I’ve got to with the big boy, I’ve got to go with Brock. You never know what is going to happen when Brock gets in the ring with anybody, let alone Roman.

We’ve seen it a couple of times but no matter how many times we’ve seen those two go at it, there’s always going to be something new.

What I like about Brock is that he’s like me, you never know when he’s going to explode or not.

So, even though Roman is the d-lineman that went to Georgia Tech, we had the close proximity going to school together, he choked me out the last time we were in the ring.

I have to get redemption for that. I hope and pray that Brock chokes him unconscious.”

Also Read: “There needs to be more characters like that” – Goldberg On Top AEW Star

During his 1999 WWF stint he was the boy-toy of the PMS Pretty Mean Sisters consisting of Terri Runnels, Jacqueline & Ryan Shamrock, but Shawn’s biggest claim to fame was losing to Kurt Angle in Kurt’s WWF debut match at the Survivor Series 1999 PPV.