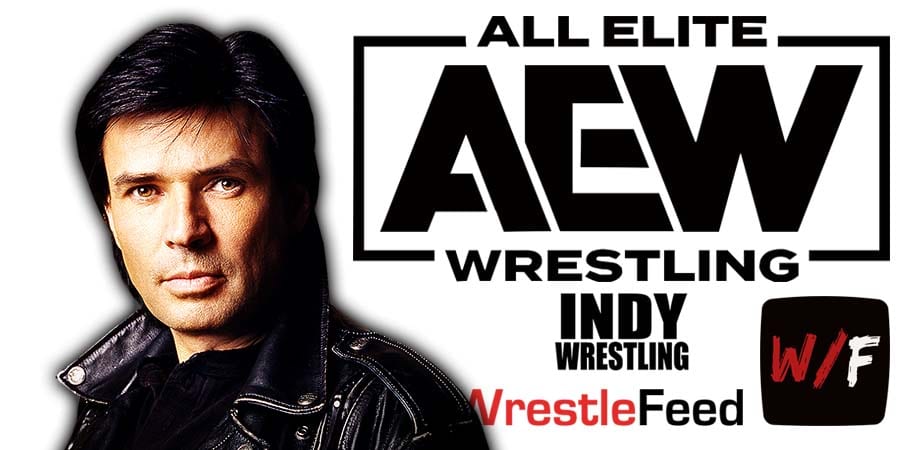 • “I think ratings back me up. AEW is flat” – Eric Bischoff Fires Back At Tony Khan For Calling Him A Hypocrite

AEW owner Tony Khan recently called WCW Legend Eric Bischoff a “hypocrite” during an interview on Busted Open Radio, after Bischoff called out AEW for the lack of stories and matches that didn’t mean anything.

On the latest episode of his weekly ’83 Weeks’ podcast, Eric fired back at Khan’s remarks.

There were certainly random matches that didn’t have any story in WCW, I’m not denying that. I’m also going to point out that I don’t think I ever said, in any of my commentary about AEW, that I believe that every match should have a story.

When you’re introducing new talent or when you have talent that you haven’t really matched up, storyline wise, with an opponent yet, but you want to expose that talent and have the audience familiar with that talent and establish that talent, sure, put people in matches that don’t really have story. Use that time, in non-storyline matches, to give us some real backstory and information about said talent. Make us care.

It doesn’t always have to be in the form of a storyline, a traditional, structured, story. If I’ve ever given the impression that I thought every match on Nitro had a storyline, forgive me now. never meant to.

My issue, and my comments about AEW and the creative behind it, is really about your top matches that don’t have sufficient story or structure, or at least a compelling one. There is always an excuse for a match or an angle, your exciting moment that creates a match or storyline, but your top matches, that’s different. I’ve seen a lot of matches, a lot of storylines, what AEW considers a storyline, that I feel are nothing more than excuses for a match. They are not well-crafted stories.

That’s my criticism. It’s not a shot. I’m not making fun of anybody or trying to belittle anybody. I’m pointing out that I believe, in today’s competitive environment, with television being what it is, pay attention Tony, if you want to build and grow your audience, you’re going to have to do it with well-crafted, compelling, well-structured storylines. I don’t see it. I see excuses for matches and that’s not a storyline. That’s my critique, constructive is how I hope it’s interpreted, but clearly won’t be.

Here’s what I would tell Tony, for clarification. Kevin Sullivan, not the wrestler, the producer. He worked in TNA, I worked closely with Kevin, he’s now working with AEW, I believe. Kevin Sullivan, the last time I talked to him, has a show bible that we presented to Spike TV. We did that on a regular basis.

It was something I felt necessary for TNA to do in order to grow its audience. I would encourage Tony to reach out to Kevin Sullivan, ask Kevin to see that bible. In that bible, you will see that the A, B, C, D story, the top four stories that are essentially driving your business, I had those storylines broken down for three months at a time.

We presented that bible once a quarter so the network was familiar with what we are doing and could get behind what we’re doing and what they could promote and should invest their resources into. It worked out really well. The thing that worked out best, you could argue they weren’t the best stories in the world, some were pretty exceptional, the Aces and Eights story is a prime example, you can hate it or not hate it, but it’s an example of a well-structured story that evolved over time and was the result of the show bible process. Go back, Tony, and look at that bible and see what I mean about an arc and your top talent having storylines that are engaging.

You may learn something. You may see something that makes you go, ‘we could do that. I get that, that makes sense.’ It actually makes your life easier once you have everything laid out for three months at a time.

I’ve never said every match on the show should have a storyline. That’s a false premise to start the conversation with. Tony is responding to a criticism that never happened. I don’t believe it, it’s impossible, really. It makes no sense that every match should have a story, but your main event, your top three or four matches, better have (a story). That is my comment. Those stories are not compelling. I think ratings back me up. AEW is flat.

You can spin in, turn it inside out, mircowave it, whatever the f**k you want to do, but Brandon Thurston puts up the graph and shows you and all you have to do is take a look at AEW’s record for the last 6-8 months. It’s flat. There is so much great talent in AEW, I really believe it. I was never really a fan of Jon Moxley in WWE and when he first got to AEW, I feel much differently now. Primarily because of the way he handled business and took ownership and control. He got over with me.

I really respect people who stand up and act professional, over and above the call of duty, to be able to save a horrible situation. He’s a hero. Chris Jericho, to this day, one of the better performers out there. There is a lot of great talent there. There’s just not a lot of great story. That’s what I would hope Tony would want to change.

I never said, ‘I don’t like AEW because all the matches are random and none of them have story.’ I just don’t think the stories are compelling or committed enough or know how to craft a great story.”

Just Joe & Funaki vs. Too Cool