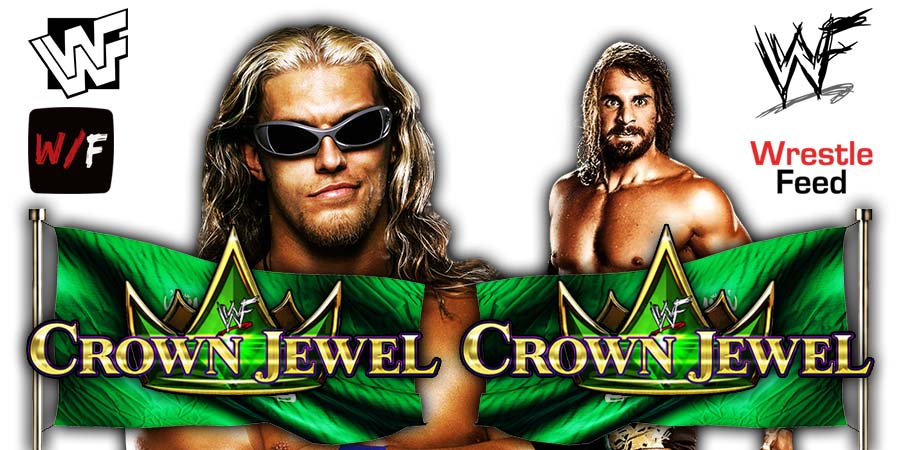 • “I wasn’t too keen on going, I’ll be perfectly honest” – Edge On Working WWE Crown Jewel 2021 In Saudi Arabia

During a recent interview on The Kids on the Escalator podcast, WWE Hall Of Famer Edge revealed that he wasn’t keen on working last month’s WWE Crown Jewel 2021 pay-per-view in Saudi Arabia, but WWE needed him, so he agreed to work the show, but made a request.

Edge requested to have Jessica Carr officiate his Hell in a Cell match against Seth Rollins, which he won.

Here’s what the Rated-R Superstar said:

“I wasn’t too keen on going, I’ll be perfectly honest. But then as we talked and they said, ‘We need it there,’ I said, ‘Okay. Well let’s get Jess [to] ref there’ and not knowing how that — if we’d even be able to but I just love the idea of a woman being in control of two men in that country, and if it flew over a lot of heads, whatever but, for me, I can come back to my girls and tell them one day, ‘I went over there but, I think we did something pretty cool’ and again, she was just right there for everything, just not in any way overwhelmed by the moment, just stood up to the challenge. It was really cool to see.

I had SummerSlam coming up with Seth [Rollins] and Charles Robinson wasn’t gonna be there and I’m kind of at a stage in my career where I’m a little picky when it comes to who refs, just because there’s a comfort level, there’s a — I don’t know.

You just find a zone together and you take that out of the equation, that’s one less thing as a talent that I have to concern myself with because I know that person’s gonna be there.

But Charles wasn’t gonna be at SummerSlam and I talked to him, I said, ‘What do you think about Jess? Should we give her a shot? Because I’ve watched her and she’s good. Let’s give her a high-profile match and see how she does. What do you think?’ And he was like, ‘Yeah, I think that’d be a great idea.’

So, we kind of took a test run at SummerSlam and man, she is so confident and so — she’s just really, really good in there and wasn’t shy, wasn’t timid. She took control of the situation and I always appreciate when somebody does that so, we had MSG and said, ‘Well, I think you gotta do part two there kiddo’ and then when I had the discussion, they asked me about kind of blowing off the entire story in Saudi Arabia.”