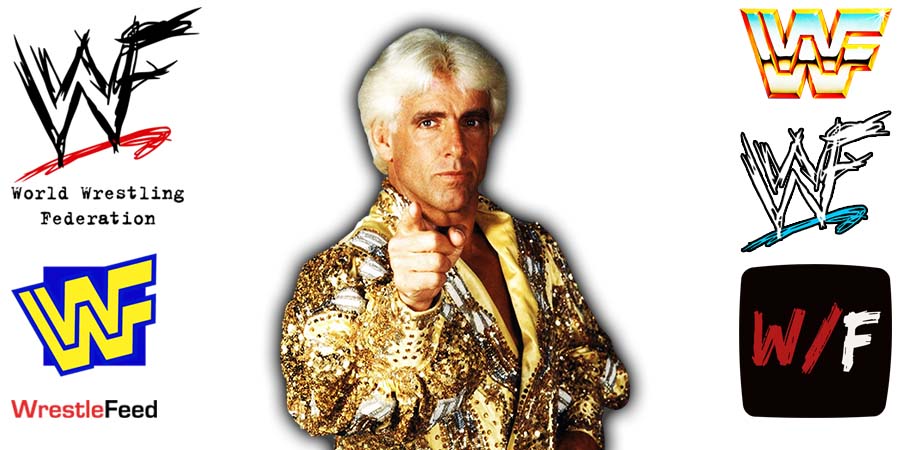 During an interview on the Two Man Power Trip Of Wrestling podcast, 2-time WWE Hall Of Famer Ric Flair talked about his upcoming match on July 31st, which will be his final match.

Flair noted he’ll be better than 85% of the wrestlers in WWE & AEW fundamentally, even at the age of 73.

“In 2018, I had 4 heart operations in 7 weeks, right? Four different doctors. So, who do you believe? Everybody’s got a different theory on what I can do, what I can’t do.

So the first guy says I can’t go skiing. Told me never to go above 10,000 feet so I went to Vail [Ski Resort], 20,000 feet, I went skiing. I fell down skiing. I fell down in the ice-ice skating so if I can do that, I can wrestle and I’m drinking again so, which I’m never supposed to be doing (laughs).

It’s easy to blame any aspect of what I’ve been through on what could happen but it’s not — I’m not worried about it, does that make sense? And I’m just having fun and I’m enjoying the competition it creates within myself and just wanna show off.

If I can do it at 73 and I’ll be better fundamentally than 85 percent of the roster in either company (WWE & AEW). I’m not talking about flying off the top rope and that but, punching, kicking, psychology of wrestling. I’ll be better than 85% and I got another month-and-a-half to train. I won’t go in there not ready.”

This episode was broadcasted from the SBC Center in San Antonio, Texas and featured matches, interviews & storyline segments on the road to the ‘WWE Vengeance 2003’ PPV.

1. The Undertaker vs. Nunzio

7. Brock Lesnar vs. The Big Show