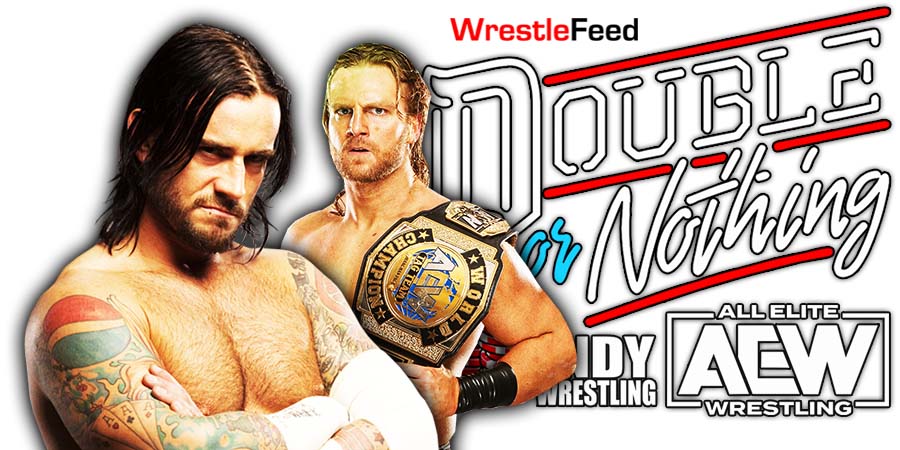 In the main event of AEW Double Or Nothing 2022, CM Punk and “Hangman” Adam Page tried to hit each other’s finishers.

While Page managed to hit the GTS, Punk failed to hit the Buckshot Lariat…twice. The crowd booed Punk when that happened.

During the post-PPV media scrum, Punk had the following to say about these 2 botches:

“That’s one of those f**king things. That’s the only time that I’ve missed it since I’ve tried it, and I did it on TV, and I just didn’t hit it for whatever reason, and it sucks.

But that’s the fun thing about pro wrestling, I’m more comfortable when sh*t goes f**king sideways, and not everything needs to look perfect, in my opinion.

I’ll probably beat myself up about it way too much, but, you know, mistakes happen.”

During an interview with Wrestlinginc, Hangman Page had the following to say about Punk botching his finishing move:

“It made me feel better about myself that I can do it, I know that.

Grabbing the ropes and flipping over like that and landing on your feet and hitting the guy in the face is hard on any day at any time, much less, you know, 20 minutes into a match, and I think that made me have a little more appreciation and pride in the ability to do it.

It doesn’t surprise me that he couldn’t do it, and that’s not a knock on him because it’s a tough-a$$ thing to do, and it’s something I’ve done for a long time. I’ve had time to sharpen it, he hasn’t.

So, I don’t know that I have the best Go To Sleep in the world either, certainly not as good as his because he beat my a$$ with it.”

Also Read: Update On CM Punk’s Injury & How He Got Hurt

Johnny B. Badd vs. Larry Santo