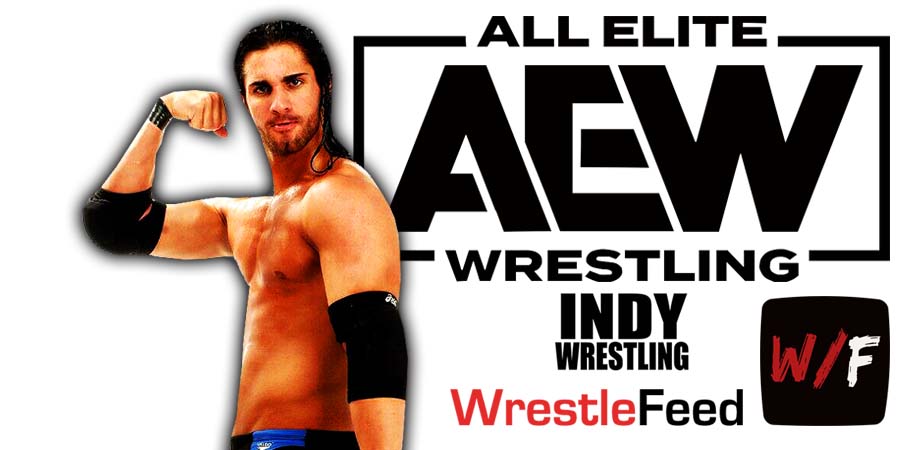 Rollins also gave his opinion on AEW wrestlers taking shots at WWE and why WWE stars don’t do the same.

On if WWE Officials were made when he mentioned Jon Moxley during his promo segment with Roman Reigns:

“Not one thing. Not one single thing. Nobody said anything to me about it. Everyone knows he’s a part of our history. You can’t do Seth and Roman without Dean or Mox, whatever you want to call him. You can’t do it.

I referred to him by the name he prefers to go by and that’s where we’re at. I heard nothing in response to it backstage.”

On AEW wrestlers taking shots at WWE and WWE stars on their programming:

“To me, it’s one of those things where, if it’s very useful, it’s fine. The references you spoke of (Rollins mentioning Moxley, CM Punk mentioning WWE) are two kind of different things.

I didn’t use the reference to Mox to talk down to somebody. I wasn’t trying to diminish anyone’s accomplishments. It wasn’t like that. He’s part of our story, Roman wouldn’t be the same if it wasn’t for Mox and I.

The other side of that coin is the way that it can be used by those guys. They can do whatever they want. I find it very tacky and low-brow, personally. I think it looks and reeks of desperation.

I don’t think it’s anything on our television show that we need to go there and talk down about those guys. They are doing their thing, they’re doing it very well, we’re very happy for them. I am, at least personally.

Are they on our level? No. They have a long way to go to catch up to us. That’s fine and they know that. They do things differently.

S.D. Jones was trained by WWE Hall of Famer Johnny Rodz and eventually became known as one of the most famous babyface ‘Jobber To The Stars’ of all time.

He wrestled mostly for the World Wrestling Federation during the 70s & 80s and did his last televised WWF jobs in 1990.

S.D. Jones passed away on October 26, 2008 after suffering a stroke two days earlier.

In 2019, he was posthumously inducted into the WWE Hall of Fame as part of their annual Legacy Wing inductions.