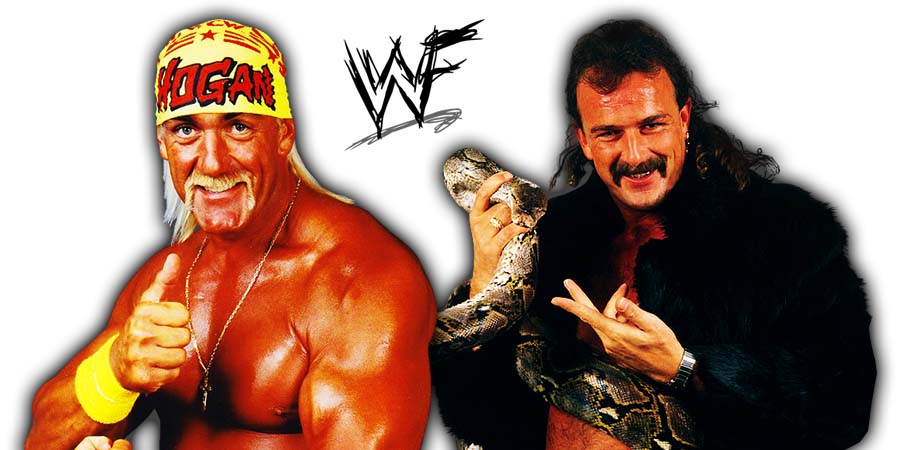 2. Tatanka & The Nasty Boys vs. Shawn Michaels & The Beverly Brothers

4. Skinner vs. The Undertaker

• Jake Roberts Recalls The Worst Match Of His Career, On Why Vince McMahon Cancelled His Feud With Hulk Hogan

During a recent interview with The Two Man Power Trip of Wrestling, WWE Hall of Famer Jake Roberts talked about his feud with Hulk Hogan, worst match of his career & more.

On his feud with Hulk Hogan being cancelled:

“People started chanting DDT, DDT because they believed in that maneuver and rightfully so, they had just seen me kill Steamboat with it. It damn near killed him. Now they are going to go after Hogan and I dropped Hogan on the set and my God the guy is down and I split his skull too. That was one thing they just could not get through their heads and that is you cannot do that DDT on concrete or on a stage set because that would just don’t give much.”

On who was worried (Vince McMahon or Hulk Hogan) that Jake might overshadow Hogan:

“It was Vince. He just said that’s it. He said Oh my god I can’t believe this. After I walked through the curtain he told me to stand right there and that he wants me to hear these people start chanting Hulk and he’s going to come to his feet and he’s going to rip his shirt off and do all of this and you guys are going to make money for a long time and blah blah blah and we waited and waited and started looking at each other and at Pat Patterson and said I don’t know what is going on here and all of a sudden the people started slow at first going DDT and started chanting DDT and Vince looked at me and said wow, well that’s the end of that.

He said he’s not going to split his marketing up and that was the whole thing. Vince made his money in marketing and not the wrestling shows. We were on the road to spread the marketing out there and for people to buy the marketing and to make us icons because he made stars out of so many people and sold so much and how many billions of dollars did the marketing make? I don’t know how many people were in the arena, not at all so that was a very expensive lesson to learn and cost me a lot of money.”

On ‘Spin The Wheel Make The Deal’ match in WCW being the worst of his career:

“Great thing the commercials were good because that was it. The match stunk and so did the idea. That was such a horrible thing to choose. What in the hell man. I’m not climbing no pole, are you serious Bill (Watts)? That is the best thing that you could come up with? I thought it was ridiculous and the match was one of my worst matches.

Sting wasn’t very excited to wrestle back then and he had gotten tired of being the guy that everybody depended on to bring in the big house and he was getting lazy because he had that contract and that is the bad thing about contracts is that guys get lazy and are like well, I’ll get all my money anyway. That is the wrong way to look at it brother, those are the guys that hurt wrestling. Those contracts and they didn’t go out there and put out and they didn’t push it and he went out there and did just enough to get by.

Well, that is just not how you do it, that is not how you wrestle and never will and same goes for these shows that I’m doing now. I go out there and I gut it and it is kind of crazy but after an hour or an hour and twenty minuets out there on stage I feel like I worked a damn match and I am using that energy and I pour it out. I empty the damn bucket and by the end of the night I have to get out of there because I am exhausted and ready to collapse because I put everything I can into it and that is how much I believe in it.”