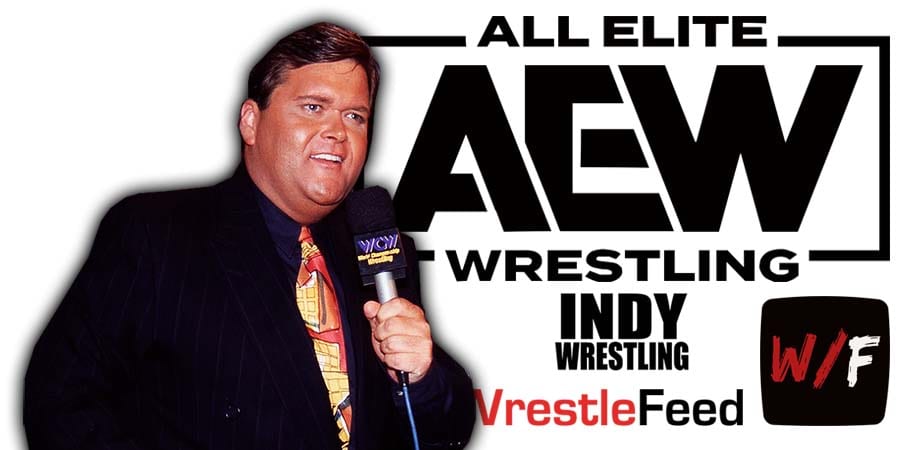 During a recent episode of his Grilling JR podcast, AEW Commentator Jim Ross gave his opinion on who should defeat “Hangman” Adam Page for the AEW World Championship.

Below is what Good Ol’JR said:

“MJF will definitely be the AEW Worlds Champion at some point in time.

I suggest sooner than later, this year as in sooner. I don’t have that written down, Tony Khan didn’t whisper that in my ear at the UFC fight [we attended] but there are a lot of guys that qualify.

Adam Cole’s got to be right there at the top of that list, he hasn’t had a bad match yet and he’s very reliable and he’s got a beautiful girlfriend that’s a big part of our team.

I think Adam Cole is in line for an opportunity with that role but I’ve got to tell you, I’m not in any big hurry to take it off Hangman Page. He’s getting better and better every time.

The things he’s done on TV the last couple of weeks, the little run-ins, talking, interacting. He’s shown a huge improvement in his game, he’s in great shape, he looks good and he’s healthy.

I’m not in any hurry for Hangman Page to lose but if it does come his turn, we have plenty of guys.

We haven’t got Kenny Omega back, Kenny Omega will be back soon at some point in time when he gets healthy.

Miro, Samoa Joe, there are a lot of guys that would be good champions. But right now, with the course I see it on, if there has to be a change, Adam Cole would be my most viable suggestion.”

Also Read: Jim Ross Explains Why He’ll Never Appear On Dark Side Of The Ring Again