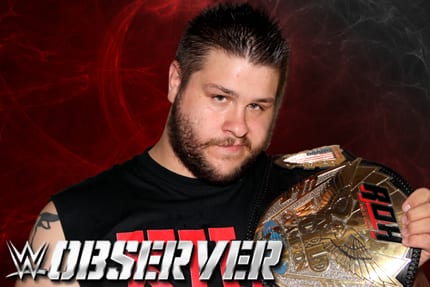 In a recent interview with The Chad Dukes Wrestling Show, current NXT Champion Kevin Owens talked about wrestling on NXT, Sami Zayn, his knee injury, Brock Lesnar re-signing with WWE & more. Towards the end of the interview, Owens threw out a challenge to former TNA Star who is rumored to work for WWE in the future. Below are a few highlights:

His Experience In NXT So Far:

“I was so excited to sign with WWE because it’s been my dream since I was a kid and I was 11 years old when I first saw WrestleMania and knew that’s what I had to do in life. It took a while to get here but now that I am here I’m not going to wait in line or do anything by the book. I took the bull by the horns as they say and two months after my debut I’m the NXT champion. So it’s going pretty well so far, it’s a really special feeling to be part of something that’s growing and that people are so excited about. To be at the forefront of it because I’m the champion makes it even better.”

“As a fan him, re-signing is incredibly exciting. As a competitor, it’s even better because of the chance of getting to be in that ring with him one day is something that motivates me. I’ve been a Brock Lesnar fan since the first time I saw him. I was there when he made his debut in Montreal, the night after WrestleMania 18 and from the get go I was like, “this guy’s awesome.” I even named my dog Brock as a tribute, whatever you wanna call it, so I’m a big fan of his. The fact that he’s gonna be sticking around here for a while and gonna do great things with WWE is exciting all around but yeah I’d love to be in the ring with him.”

“I feel like Adam Cole would be a great addition to NXT, a guy like Cedric Alexander also would be really good but they’d all have to come through me first and that won’t work out that good.”

“I’m open to a challenge from anyone, including Samoa Joe, I’ll just put that one out there.”