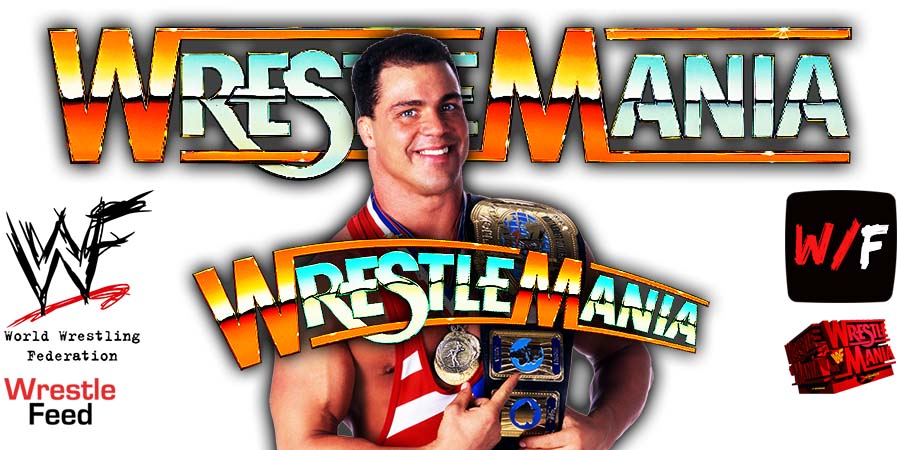 During a recent edition of the Wives of Wrestling podcast, Reby Hardy (Matt Hardy’s wife) and Giovanna Angle (Kurt Angle’s wife) revealed that Angle’s pyro at WrestleMania 33 was actually used for The Hardy Boyz and Angle didn’t get any pyro, which ended up making the former WWF Champion mad.

“WrestleMania 33 was the big debut of Matt and Jeff, the big surprise at WrestleMania so that is a big, huge WrestleMania day for The Hardys, otherwise known as ‘F**k Kurt Angle Day’ (joked).

Apparently, I didn’t know until after they came out — it was a beautiful moment, right? They’re going down this beautiful, long ramp, and all the fans are going crazy.

It’s a great moment, and there’s pyro, and there’s fireworks in the sky and Matt’s going in slow motion like this [stretches arms]. It’s amazing, right? Beautiful.

So I don’t know if it was like right after, or a couple of days, or what, Giovanna said, ‘Hey, did you notice how you know at the end of Matt and Jeff’s match there at WrestleMania that the fireworks were red, white, and blue?’

“It’s funny as sh*t, okay? If you see a video of Kurt…you know how he comes out and they do the Hall of Fame? He did this [raises arms] waiting for his fireworks, and it didn’t happen.

Kurt comes out after, and I come up to him, and he was like, ‘They didn’t do my fireworks.’ He was so f**king butthurt.”

Angle later addressed this situation on his podcast and said the following:

“Vince [McMahon] told me ‘you could have fireworks, they’re going to be red, white, and blue. When you go out there, point your fingers towards the sky and we’re going to do the pyro and the fireworks.’

The next match was The Hardy Boyz, I find out later Vince called an audible and he had fireworks for all the championship matches but not the tag match.

He took my fireworks and gave them to the Hardyz. They had all the red, white and blue fireworks when they won.”