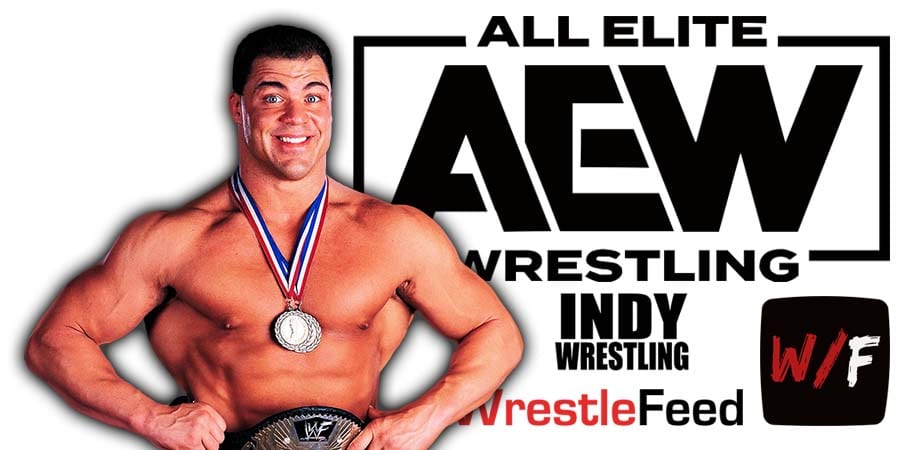 • Kurt Angle Reveals Details Of The Contract That AEW Offered Him

During an interview with NBC Sports Boston, WWE Hall Of Famer Kurt Angle revealed details of the contract that AEW offered him.

The former WWF Champion revealed that Tony Khan wanted him to wrestle and a 10-match contract was offered. A non-wrestling, on-screen personality role was offered as well.

Angle turned both the offers down because of his health and him starting a supplement company.

They did offer me two different times, and they did want me to do an on-camera personality as well, or a non-wrestling role. I actually turned that down as well.

I just wanted to start up my supplement company, so I wanted to put more time into that. So, I didn’t want to leave the company at this particular time, so I decided not to do it.

They wanted me to have big special matches. They gave me a contract for 10 matches, but they didn’t say how long it would be, so it might not have just been for a year. It might’ve been for 3 years, and I would’ve wrestled 3 matches a year.

But I decided not to do it because of my supplement company, and the fact that I’m just not the same as I used to be.

If I’m gonna go in there and wrestle, I want to be the old Kurt Angle, and I know I can’t be that anymore.”

Also Read: “No, not at all” – Kurt Angle On If He’s Happy With His Final WWE Run

On this day in 2013, we lost Old School WWF Veteran “Doink The Clown” Matt Borne (Real name: Matthew Osborne) at the age of 55 due to a drug overdose.

Matt Borne played the original Doink The Clown, which was a Heel gimmick, before others took over and the character turned babyface.