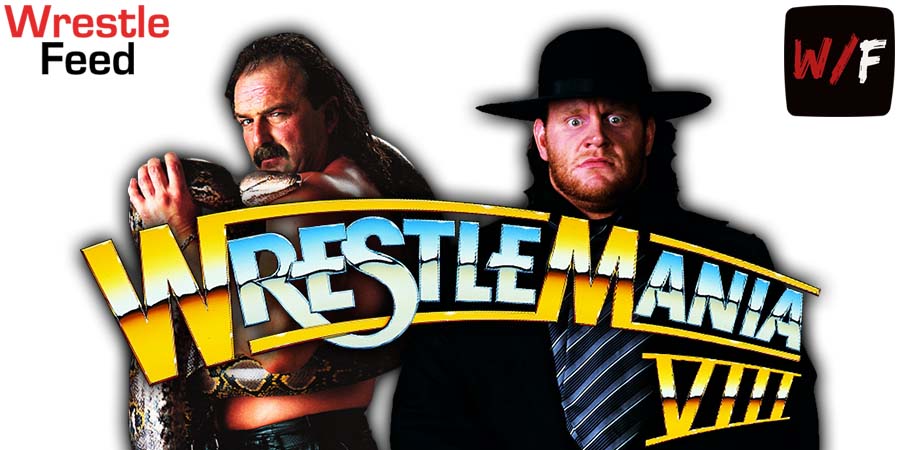 During the latest episode of his weekly ‘DDP Snake Pit’ podcast, Jake Roberts revealed to his co-host Diamond Dallas Page that while he was feuding with The Undertaker in early 1992, WWF promoter Vince McMahon talked about changing The Undertaker’s character, but Jake stopped him from even thinking about that any further.

Here’s what The Snake had to say:

“I’m old school, I like the first one. I know I was in a meeting with Undertaker and Vince and creative. And they were talking about changing [The Undertaker’s] character.

And I asked, ‘Excuse me. I have one question. Is it not working anymore? If it’s not broke, don’t fix it. Leave it the f**k alone. Why break something that’s working?’

During the famous 1992 rivalry that led up to their WrestleMania VIII match, The Undertaker actually turned babyface for the first time since joining the World Wrestling Federation.

Jake Roberts became the second annual victim of The Undertaker’s famous WrestleMania streak, but left the WWF right after that match to join WCW a few months later.

On this day in Pro Wrestling history on October 8, 2006, World Wrestling Entertainment aired ‘WWE No Mercy 2006’ LIVE on PPV from the RBC Center in Raleigh, North Carolina.

This pay-per-view featured the Superstars of the WWE SmackDown! brand.