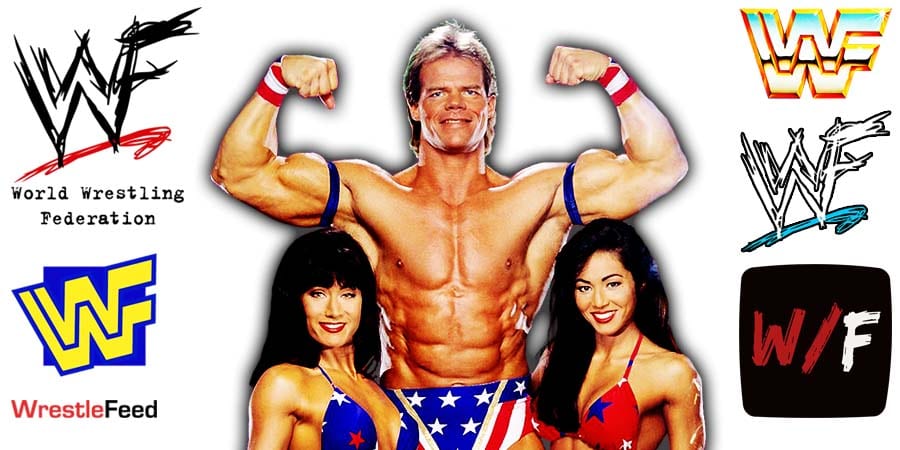 On the newest episode of “X-Pac” Sean Waltman’s podcast “Pro Wrestling 4 Life”, Old School WWF Legend Lex Luger talked about his babyface turn in the summer of 1993, when he slammed WWF World Heavyweight Champion Yokozuna and went on to main event the SummerSlam 1993 PPV, which he ended up winning but only via count-out, which resulted in Luger not winning the WWF Title.

The Total Package then spoke about winning the Royal Rumble and wrestling Yoko again at WrestleMania, where Lex still didn’t win the Title.

On slamming Yokozuna at the Stars & Stripes Challenge:

So I was so nervous. I didn’t have good footing when I got in that ring there. I have cowboy boots on, and Yoko calmed me down and said, ‘Don’t worry, I got this, just get a wide base.’ I just got a good base and helped turn him, but Yoko, as you know, I called The Dancing Bear.

Those island boys, so athletic and born to wrestle. He literally almost slammed himself off of me getting a good base and helped turn him just a little bit. He was that agile. I was so relieved after that. Wow! He was unbelievable.

The crowd reaction, Manhattan Skyline in background, and the surprise that we had with me coming down and pushing Bobby Heenan out of the way, the setup to the whole thing was great. One of the great moments I’ll always remember in my career for sure.”

On if he should’ve won the WWF Championship at the SummerSlam 1993 PPV:

“A lot of people felt that way, that it would have been better even if I turned the belt over to him the following night on RAW and got heat on Yoko, he did something to me to get it back or something.

I enjoyed the opportunity obviously, and it was a great promotion, but a lot of people thought it might have been more beneficial if you’re going to still go with Yoko and have the babyface win and have Yoko win it right back or something. It might have been good. I agree with that for sure.

In defense of Vince [McMahon] and the decision makers at the time, Vince was really big, you know how much The Garden meant to Vince, he never promised me the title. Vince and I had a great relationship.

‘If I want to put the title on you, rather than at SummerSlam, I’d rather wait and do it at WrestleMania 10 at Madison Square Garden.’

He had that in his head that if you’re going to be my guy, I’m going to put the belt on you as a babyface and give you a run with it.

Then things happened after that, and he ended up putting it on Bret [Hart], who was a great champion. ‘Why did they not give him the belt?’ That really was Vince’s thinking. ‘I’ll get everything revved back up for WrestleMania, and what a way to coronate Lex as my champion if that’s the way we decide to go at WrestleMania 10.’ That was kind of a little backstory to that whole thing.”

Also Read: Lex Luger Able To Walk To A Certain Degree Because Of Diamond Dallas Page

It was broadcasted from the Boling Arena in Knoxville, Tennessee and featured matches, interviews & segments, on the road to the ‘WWF Backlash 2001’ PPV.