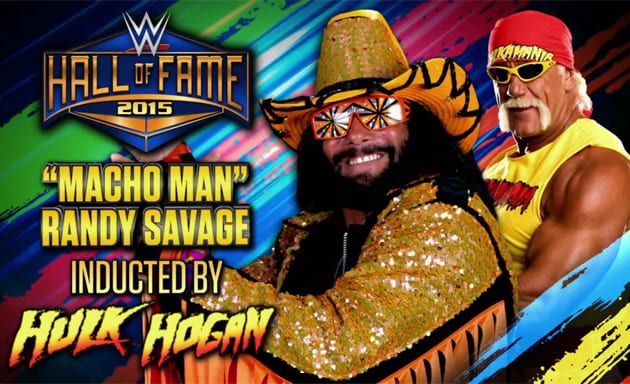 WWE officially announced on January 12th edition of Monday Night Raw that the newest inductee into the WWE Hall of Fame will be the late great “Macho Man” Randy Savage. It was also announced that Hulk Hogan will be inducting Savage into the Hall of Fame. The 2015 WWE Hall Of Fame takes place from San Jose, the night before WrestleMania 31 and will air live on the WWE Network just like last year.

Here’s what Bret Hart tweeted regarding this announcement:

Congrats to Randy Savage, a true great, a real legend, a friend & mentor…one of the wrestlers I miss the most. Look forward to being there

STAMFORD, Conn., January 12, 2015 – WWE (NYSE:WWE) announced today that Randy “Macho Man” Savage will be inducted into the WWE Hall of Fame by Hulk Hogan™.  The posthumous ceremony will take place Saturday, March 28 at SAP Center, as a part of theWrestleMania® 31 Week activities.

“Randy Savage was one of the most iconic Superstars in WWE history,” said WWE Chairman & CEO Vince McMahon.  “While millions of fans around the world mourned his passing, they will now be able to celebrate his rightful induction into the WWE Hall of Fame.”

One of the greatest stars in WWE history and a pop-culture icon known for his incredible athleticism, trademark “Ooh, Yeah” catchphrase and elaborate ring attire, Randy “Macho Man” Savage made his WWE debut in 1985.  In 1986, he became Intercontinental Champion, holding the title for more than a year until losing it to Ricky “The Dragon” Steamboat™ at WrestleMania IIIin one of the greatest matches in WWE history.  At WrestleMania IV, Savage once again made history by becoming WWE Champion in a tournament where he competed in an unprecedented four matches.

At WrestleMania V, Savage lost the WWE Championship to Hulk Hogan, but soon went on to memorable feuds with WWE Hall of Famers Dusty Rhodes™, Ultimate Warrior™ and Jake “The Snake” Roberts™.  Savage again made history in 1992 by defeating WWE Hall of Famer Ric Flair at WrestleMania VIII to become WWE Champion for a second time.  After losing the Championship back to Flair, Savage continued to perform in WWE both in the ring and the broadcast booth until his departure from WWE in 1994.  While competing in WCW®, Savage continued to add to his legacy, becoming a multi-time WCW World Heavyweight Champion.

Additional WWE Hall of Fame Class of 2015 inductees will be announced over the coming weeks.

Tickets for the 2015 WWE Hall of Fame Induction Ceremony at SAP Center go on sale this Saturday, January 17 at 1 PM ET/10 AM PT through www.ticketmaster.com or by calling 1-800-745-3000.  All tickets are subject to service charges and facility fees.

Here’s the video for Macho Man’s Hall of Fame Induction announcement that aired on Raw: