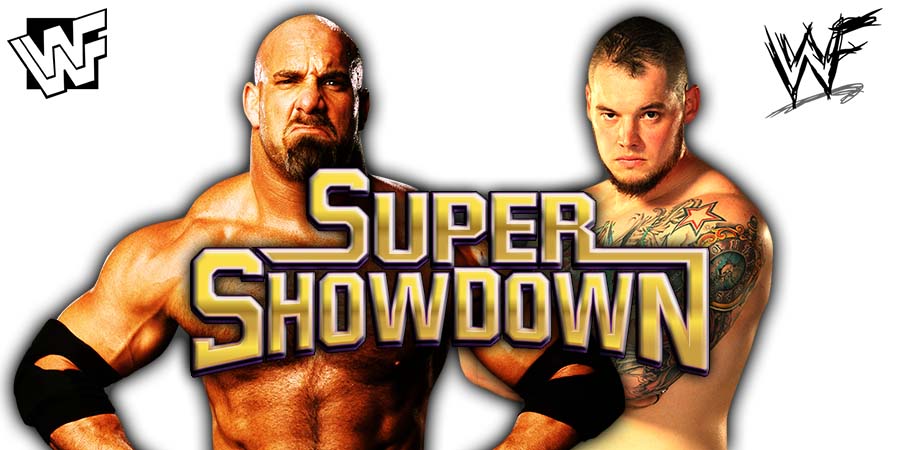 This episode was pre-taped at the Civic Center in Anderson, South Carolina and featured matches, interviews & storyline segments on the road to the ‘WCW SuperBrawl III’ PPV.

– 2 Cold Scorpio vs. The Executioner

• Major Update On Current Plan For Goldberg At WWE Super ShowDown 2020, Sting vs. The Fiend Cancelled

According to The Dirty Sheets, the following two matches were originally planned to take place at WWE Super ShowDown 2020 on February 27 in Saudi Arabia:

WWE Hall of Famer Sting flew to Houston during Royal Rumble 2020 weekend to negotiate terms of his return and reached a deal.

However, WWE officials decided not to use Goldberg and Sting at the same event and went ahead with only Goldberg working the upcoming Super ShowDown 2020 pay-per-view.

With Sting out of the picture at Super ShowDown 2020, there’s some speculation backstage in WWE that this could lead to a match between Goldberg and The Fiend, as it’s a bigger match than Goldberg vs. Corbin.

However, Goldberg facing The Fiend would mean a guaranteed loss for the WCW Legend.

WWE plans on eventually doing Goldberg vs. Roman Reigns down the line and WWE officials don’t want Goldberg to lose much before he eventually puts over The Big Dog.

The above reasoning is expected to lead to WWE moving ahead with the originally planned Goldberg vs. Corbin match. This would also make sense, as Goldberg suffered a devastating loss to The Undertaker last time he wrestled in Saudi Arabia, so he needs to pick up a win in Saudi and Corbin is the perfect opponent to get that win.

No word yet on who The Fiend will face at Super ShowDown if Sting isn’t working the show.