• Matt Hardy Has Pitched An Interesting Storyline To WWE Officials

According to the Wrestling Observer, Old School WWF Veteran and current SmackDown Superstar Matt Hardy has pitched an interesting storyline for himself to WWE officials.

Matt wants to play multiple gimmicks on WWE programming. Last year, Matt was WOKEN Matt Hardy, but he returned to WWE programming this year as a ‘Hardy Boy’.

This is possibly the reason why Matt is calling himself “Multifarious” nowadays. 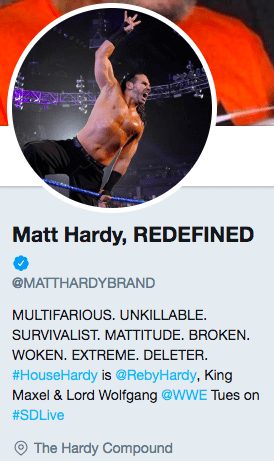 For your entertainment here on Twitter, I give you the most recent #WOKEN Word of the Week, MULTIFARIOUS! pic.twitter.com/p8bIWb4258

If Matt gets his idea approved, then he might be playing the following gimmicks/characters on WWE programming: