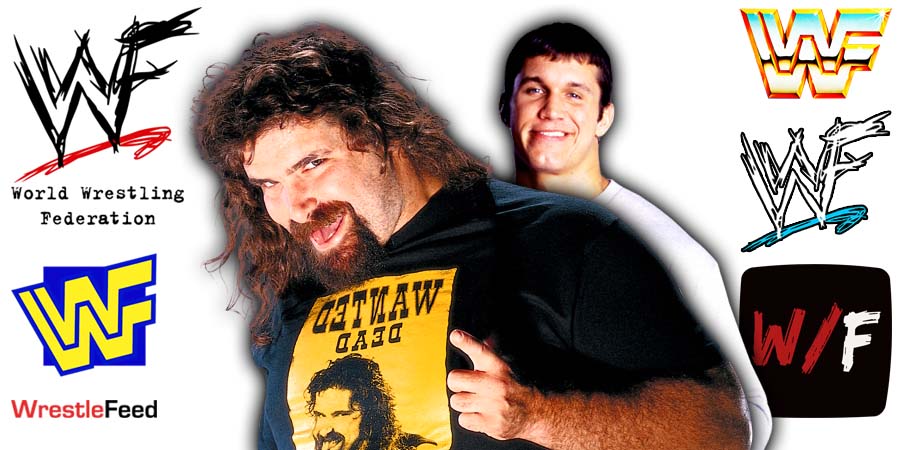 During an interview with Throwing Down with Renee & Miesha, WWE Hall Of Famer Mick Foley talked about Randy Orton, who was his opponent during the Ruthless Aggression Era.

On Randy Orton completing 20 years on the WWE main roster:

“I think it’s surprising when anyone makes it 20 years. I try to tell people that it’s a marathon, not a sprint, and not to get too dejected.

I remember, not to be a name-dropper, but you’re going to drop a name it might as well be Becky Lynch’s name. Prior to being The Man, you know, she was – I was going to say a little frustrated, but probably more than a little.

I remember talking to her on the phone, and I was – first of all, I was not aware that the women had started becoming far better compensated in the modern era. I was telling Becky, you know, don’t rule out the independents.

You might feel a great weight is off your shoulders, and then I said, ‘hey, I would never inquire about money, if you don’t mind giving me a ballpark figure as to what you make?’ And as soon as she told me, I said, ‘well, you’ve gotta stay!’ I was so happy that the finances had picked up.”

On pitching the idea of feuding with Orton to Vince McMahon:

“First, let me set the scene. Back in 2003, I had – I guess I had the pull that I could call Vince one day with an idea, then I would be in his office pitching it, because I was one of the few guys that lived within driving distance of Stamford.

Keep in mind that I hadn’t wrestled for 4 years, at that point it was 3 and a half years. I said, ‘I’d like to enter the Rumble and win it, and because I’m not technically a SmackDown or a RAW guy, I would like to challenge both champions to a three-way match, win that at ‘Mania and become the Undisputed Champion.’

And without even blinking, Vince just replies, ‘I have no interest whatsoever in doing that.’

He had a yellow legal pad, he was just taking down all these notes, and by the time the meeting was over, we had this idea for me and Randy.”

On Orton not wanting to spit on him:

“It all balanced on me being the first guy to walk away from a match. Just have a crisis of confidence, basically, I guess chicken out would be one expression. Vince didn’t want me to do it. Stephanie called me up, ‘we’re gonna have Evolution attack you.’ I said, ‘Why? What happened to me stepping out of the match?’

She said, ‘my dad doesn’t think the fans will ever forgive you.’ So I said, ‘OK, I’m gonna call your dad.’ So I called Vince, and he said, ‘Mick, you’ve just worked so hard. I’d hate to have the fans rebel on you that way.’

I said, ‘Vince, you’re a big fan of Westerns, right? Go back and watch Shane and tell me how could that movie – as he accepts the challenge the first time, because the entire movie is predicated on this guy finding this deep part, dark part of his soul that he thought he’d left behind.

They went with my idea, but I had to talk Randy into spitting on me, on camera. He did not want to do it, then he finally said, ‘Mick, what if I just pretend? I won’t really spit on you.’

I said, ‘Randy, this is one of the most important moments of your career. You need to dig down as deep into your lungs as far as you can, and the people need to see that residue, proving he was a gamer when it came time to do it.’

You would never guess that he was hesitating on that.”

Also Read: Mick Foley Reacts To Randy Orton Putting Him Over On RAW

This episode was pre-taped at the Earl’s Court in London, England and featured matches & storyline segments on the road to the ‘WWE Backlash 2007’ PPV.