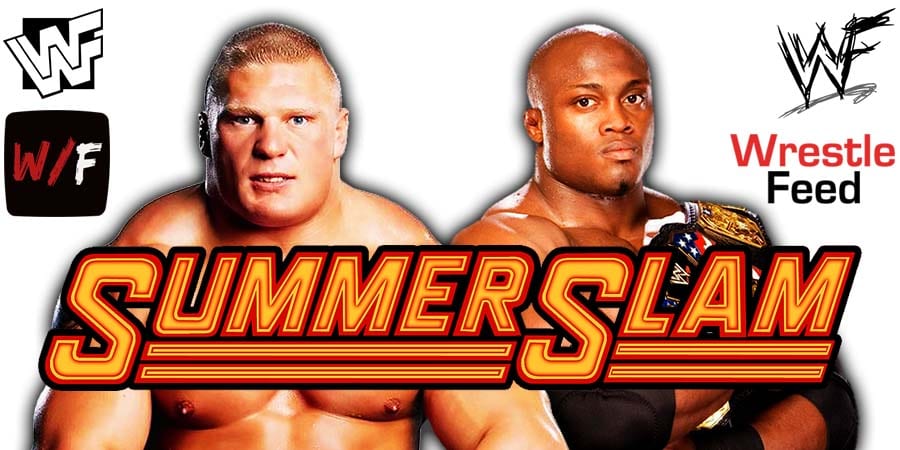 Current WWE Champion Bobby Lashley recently spoke to Rick Ucchino and was asked if Brock Lesnar is ducking him.

“I don’t know that answer, I really don’t. I haven’t said no. I’ve always, as you can tell, I can only stay ready for so long, but I don’t know. Maybe it’s not something that’s as important to him. Maybe, I don’t know.

Maybe he’s already accomplished everything that he’s wanted to accomplish. Maybe it’s a lose-lose situation for him. I don’t know what his reasoning is.”

Last night before the Hell In A Cell 2021 pay-per-view, Fightful Select reported that Lesnar’s return is near:

“Brock Lesnar and WWE have been in recent talks about a return to the company. WWE was said to have plans in order for Brock Lesnar, and hopes that he could return imminently if they have their way.”

With all of this going on, it looks like we’re finally going to get the long-awaited Brock Lesnar vs. Bobby Lashley match at some point.

WWE has even started planting seeds for this feud.

WWE put up a poll where they asked the fans who’s going to win the WWE Championship Hell in a Cell match between Bobby Lashley and Drew McIntyre.

The result was 3% Lashley and 97% McIntyre, and a fan replied the following:

“Lesnar is going to return and beat both of them 😂 “