During a recent edition of “The Brand” podcast, former WCW wrestler Vito LoGrasso discussed the Cruiserweight Title match between Kalisto & Enzo Amore from TLC 2017 along with co-host Jeff Lane. Vito talked about the poor timing of Kalisto & Enzo and below is the discussion:

Jeff: So Enzo Amore gets the belt back. And we had talked earlier last week about when they took the belt off of Enzo. We all thought it was a mistake and it’s killing his heat and all that stuff. Can they get back to where they were at? Did they do enough or in your opinion are we still below where he was before he lost to Kalisto?

Vito: I said last week that Kalisto was a transition champion. I said they did this on purpose to spite Neville . That’s why they put the title on Kalisto. It was a week run. I called it last week, I said he’s gonna get the title. Now with all due respect, Enzo sounded like he was sick. His voice was a little raspy. Didn’t look like he was all that good. Now Enzo, like I said, he’s a great character. He has got a great persona. One thing I don’t like is his wrestling ability. It is below average. It’s primitive. His outfits are good. His presentation is great.

One thing that stood out with me is when he was thrown outside, if you watch it back you can see Enzo was just thrown outside, Kalisto standing there. Now Enzo was watching him do this. Any dummy who sit in there is gonna say – why am I gonna let this guy hit the rope, dive through the middle and jump on top of me? Why is he gonna let that happen? Guys, it’s Wrestling 101. You got to be on the sell. You have to have that sideway vision. You have to have timing. It was terrible. His wrestling skills are that bad. The match wasn’t any good. I said – Thank God it’s over.

One of the things I had down and 100% on my side as a pro wrestler – ‘Timing’. You gotta have timing. Everything is timing. Everything’s got to look crisp. Every spot has got to be on time. You calculate things. Know when to stand. Know when to sit. It’s all timing. These two guys don’t have timing and they’re running, they’re doing. And you could see it with Enzo doing these wind-ups, the field goal kick.

But one thing I hate more than anything else guys ….. best way to explain it…. when I wrestle I wrestle in twos and threes, it’s two moves or three moves, and I’m thinking two moves ahead. Because you can’t just do one move put your hands up in the air and say you’re great. You have to do two moves at a time, three moves at a time.

I know you’re in front of 20,000 – 30,000 but you gotta be the coolest cucumber in the building. You’ve got to be the baddest son of a b***h when you’re a heel. And you can kick the hell out of everybody in that stadium and the 10,000 that are waiting outside to kick your a**. And if you’re a babyface you got to make every woman and baby crying out for you to make that heroic comeback.

This is what you have to do guys. This is what’s working at your craft. Kalisto doesn’t have no mic skills. He’s trying to be a Rey Mysterio makeover. Enzo is an original, but he has just got to work on his wrestling skills. He just not there.

Jeff: Another thing like that I think is lost art in today’s product, outside of Brock Lesnar, that is like giving the babyface time to sell. I remember like you would pause and look at the camera. You would do like your chops and like your karate looking moves or whatever they were.

But at the time the babyface is still selling and selling your offense. And I believe like the heel is also getting themselves over for the camera at the same time. I like the pacing of that. I always thought it was great. And I don’t think we see enough of that stuff today.

Vito: You don’t see it because guys don’t have confidence. And you can’t tell somebody. You have to have swagger. It’s not about me putting myself, it’s about me explaining the journey on how to be a good wrestler. When I started out, I was on the bottom. But I had the best education learning from Bret Hart, The Legion of Doom , The Big Boss Man, Typhoon, British Bulldog.

Look at all the experience I gained wrestling these guys. And then when you go through okay you’re a heel, you gotta sell for the babyface. Then you’re moving through the times where you go to territories and then you start to get over.

And then I became Vito LoGrasso and I had a singles run and then you came out with the robe, the hat. I had that swag that I can whoop everybody’s a$$ in the building and that’s something I carried through my whole career. If you’re going to be a good heel, you better be the baddest heel on the planet. You better be able to be better than Mike Tyson’s right hand. I had that. When I went to WCW, I added more to it.

I was a bad guy, I was tough, I played the camera, I did my thing. But I also gave that guy time to sell my offense because what that one right hand I gave you that was the good right hand that’ll knock you out. I gave you time to register, to sell it. I brought you back up. I was always there to take you down again until it was a time for the go home for the babyface to get over.

When it came time for me to be a babyface and this is something good for a lot of young wrestlers out there and a lot of listeners. In order for you to be a good babyface you have to be a great heel. And I say that with all due respect to all the guys who were great heels and then when they make that turn.

Guys out there listening who are young heels – you be ruthless, you be aggressive, you do your thing, take a couple steps back, give the guy a chance to sell, don’t be afraid to talk to them, don’t be afraid to give your knowledge. If you’re a babyface and a heel beat hell out of you, what’s the way to get over? Sell baby sell. When it’s your time to get your comeback, that’s when you make it. That’s when you come alive. And that’s when you’re a ball of fire.

During SmackDown Live’s invasion of Raw, SmackDown Women’s Champion Natalya accidentally touched Zack Ryder’s crotch. Below is a meme that’s been going around on the Internet regarding this: 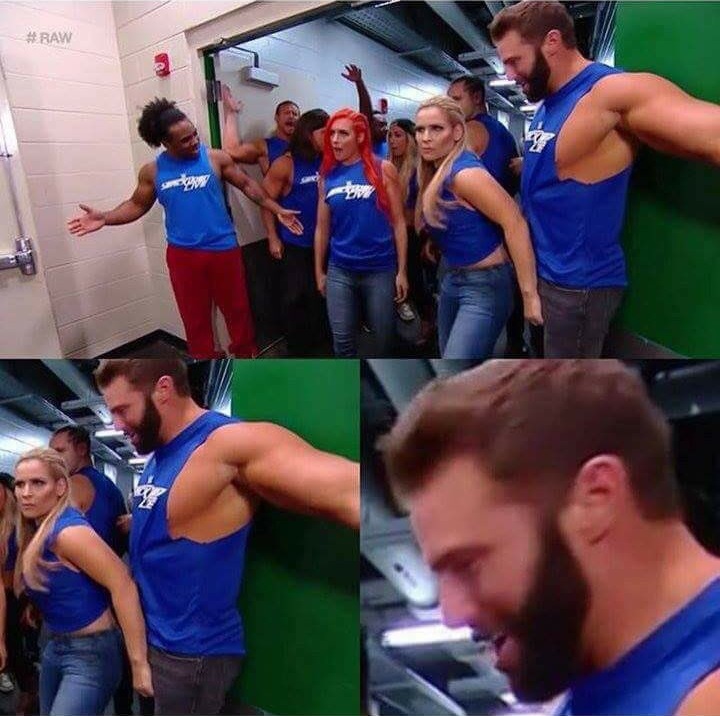 Below is what Natalya tweeted about this:

All I can do is laugh!!! I’m sorry @ZackRyder … wasn’t intentional! And everyone settle their tea kettles!!! ? https://t.co/wWmBlqqYgI

Below is what Ryder replied: