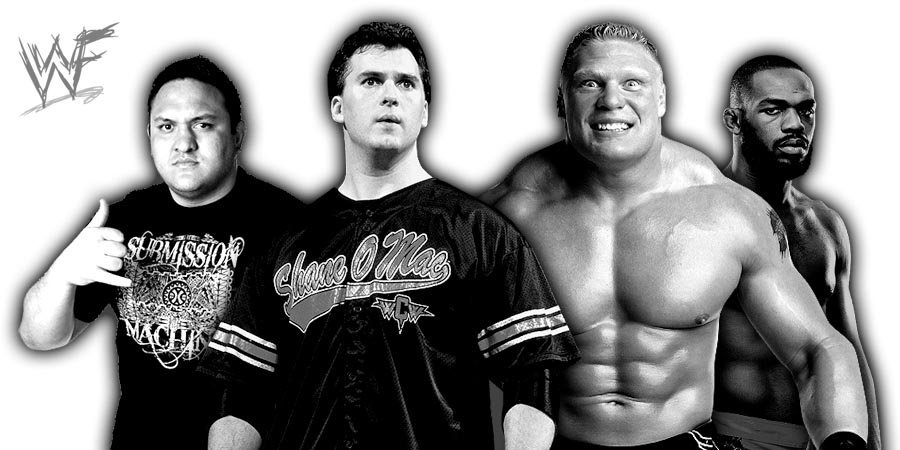 Let’s take a look at the top 20 news stories of the day from the world of WWE (SummerSlam 2017, Brock Lesnar, Jon Jones) & Professional Wrestling:

During the latest edition of The Triple Threat Podcast, ECW Legend Shane Douglas gave his views on the Kurt Angle-Jason Jordan storyline on Raw. Below is what he said:

“The one thing I don’t think wrestling needs any more of right now is more stupid s**t. That is no reflection on Jordan or Kurt but it is on the storyline. The fans are ready to sync their teeth into more believability and more realism as opposed to something like Shane Douglas’s father was an alien. You’ve got to keep some assemblance [sic] of believability. We always talk about the fans ability to suspend disbelief but when you look at that storyline in this day and age with Ancestry.com and all of these ads where you can type in a guy’s last name and you’ll be astounded at the results you get or the offers you get pitched. I learned from Paul Heyman a long time ago that there are certain storylines that you can do and push the envelope but there are others that you try to do and at some point that damn thing called a pesky fact or as my old professor would call them “those damn pesky facts” show up and people will realize or Jordan’s family members will realize at some point that he isn’t related to Kurt Angle and it is all bulls***. To put something out there that is so cartoony and has fake bulls*** written all over it, why put it out there? It isn’t 1965 with televisions that have rabbit ears, I can ask my sons a question and I see their thumbs going a million miles an hour and they’ve already got the answer thirteen seconds later. I just think that maybe Vince is believing the it is “Sports Entertainment” and everybody knows it is fake.

I don’t know if Vince honestly believes that the suspension of disbelief is unimportant or that you can just write it in. What is next? Is Kurt Angle or Hunter going to be allergic to kryptonite? Sooner or later it is going to have to go somewhere and you have to keep pushing the envelope further and further. Or Brock Lesnar. Brock Lesnar is going to allergic to salt or some kind of basic carbon so Brock Lesnar has to be surrounded by a bubble. You can only go so far before you become f***ing absurd and to me this storyline is pushing up to that level of being f***ing absurd.

You’ve got an American Olympic hero being rendered in a storyline that to me twinges on racist and to me it is a very strange storyline and everybody on the planet who has ever watched is going to know it is bulls*** and I don’t know why you would go there with it. I know the reason in the back of my head that I believe and it is Vince is sitting back laughing saying that it is funny as hell. The fans ain’t buying it and we wonder why Raw is under a 2 and sinking like a stone”.