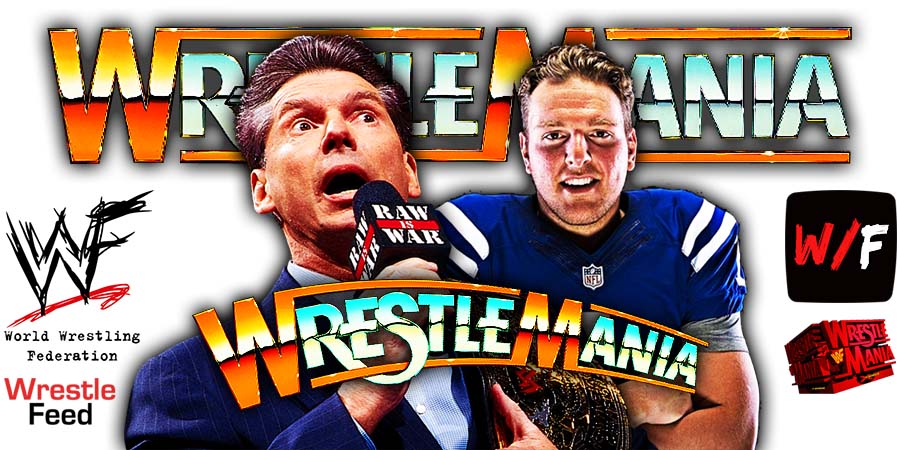 At WrestleMania 38, Vince McMahon ended up wrestling and defeating NFL Veteran Pat McAfee in an impromptu match, without taking any bumps (except for a horrible Stone Cold Stunner front-bump after the match).

According to the Wrestling Observer, the original plan was for McMahon vs. McAfee to be set up in advance, with the seeds being planted when McMahon appeared on The Pat McAfee Show.

However, during that interview, McMahon only announced that McAfee will have a match at WrestleMania 38, and his opponent was later revealed to be Austin Theory.

So instead of having a match that was announced well in advance, McMahon vs. McAfee ended up being a short, impromptu match:

“I mean the thing with, you know, the Vince and McAfee thing which did not happen though it was supposed to, I remember the people in the company were like…because the original idea of the Vince-McAfee interview was to do the angle. And they didn’t do it at all, really.

And I remember people from the company going like, you know whatever it was maybe Pat or Vince, it was one of them who didn’t want to do it that way, so they changed.

I was told right after they were going to do an angle there, and it didn’t happen, but I was told Vince is still…the idea of Vince doing the match itself probably wasn’t decided until the very end because I kept being told Vince is involved, he will do something, there will be an angle but what he does, whether it’s a match or not, is something that he’ll probably decide at the last minute. As far as them going there and doing those angles, that was always going to happen.

McMahon beat McAfee with the help of Theory and that was Vince’s final match.

However Vince McMahon did get him a role in the Hulk Hogan movie ‘No Holds Barred’ as a character called the “Big Headbanger”.